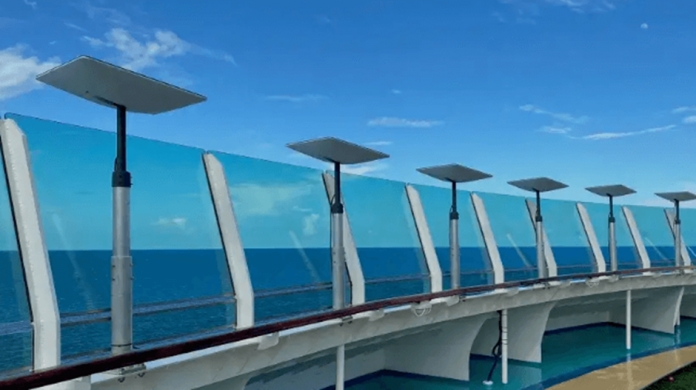 Carnival Corporation has joined the rush to add SpaceX’s Starlink satcom service to its fleet, joining Royal Caribbean and Hurtigruten.

Carnival already started the rollout in December on the fleets of its Carnival Cruise Line and AIDA Cruises brands, and it plans to add Starlink to some of its other global brands as well. Carnival Corp. also owns Princess, Holland America, Seabourn, P&O, Costa Cruises and Cunard. The Carnival Cruise Line brand sustained internet service slowdowns on several voyages last year, attracting speculation about whether the company would follow Royal Caribbean and add Starlink.

Cruise lines are the maritime industry’s power users for high-speed, low latency broadband. New low earth orbit (LEO) satellites like SpaceX’s Starlink constellation circle at altitudes as low as 350 miles. At this range, real-world latency can be as low as 30-40 milliseconds – approaching cable internet performance. For Starlink, bandwidth is reportedly in the range of 100-300 mbps per antenna pair – better than many cable internet packages. By installing multiple antenna pairs on the ship, gigabit capacity is readily attainable.

Carnival says that it is adding Starlink to give its customers faster Wi-Fi with higher bandwidth and better reliability. It emphasized that it will maintain a “multi-provider” satcom service portfolio, and it plans to route its data traffic as needed among multiple services.

In a constantly-connected age, fast Wi-Fi delivers return on investment in the form of passenger satisfaction – and in return, passengers give Carnival publicity in the form of underway social media posts.

“For many of our guests, it has become more and more important to maintain the type of connectivity at sea that they’ve become accustomed to at home, and of course to share the unforgettable experiences of their cruise,” said Josh Weinstein, CEO of Carnival Corporation. “Starlink makes it as easy as possible for our guests to share all their great moments and memories.”

Though their initiatives are less well publicized, other sectors of the maritime industry are considering Starlink as well. Multiple third-party connectivity providers (Marlink, Tototheo, IEC, Elcome) have added it to their portfolios; it can also be bought directly from SpaceX for $5,000 a month and $5,000 in equipment. Solstad is currently testing Starlink in the North Sea, and MOL is using the service alongside VSAT and L-band backup.