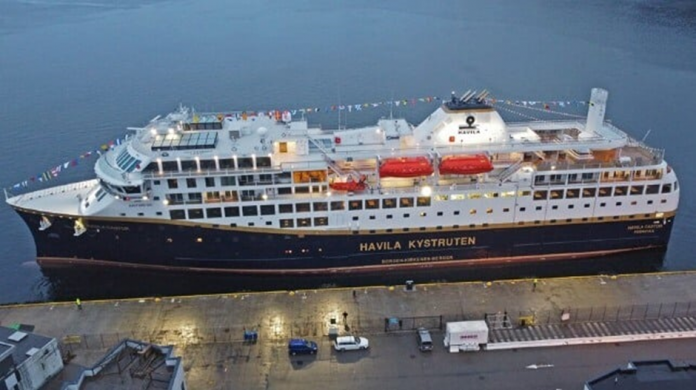 Havila Kystruten, which operates coastal passenger service in Norway aboard its fleet of newly built RoPax ships, is changing the rules for the transport of vehicles excluding electric, hybrid, and hydrogen vehicles due to the fire risk. It is the latest step by the shipping industry which has become acutely aware of the increasing danger of transporting EVs and other alternate fuel vessels.

The company is currently operating its first two cruise ships which were designed to also transport a limited number of vehicles and cargo as part of a contract with the Norwegian Ministry of Transport to provide the coastal service. Two additional ships are due to enter service this year to complete the fleet for the voyages between Bergen and Kirkenes.

Havila reports it requested an external assessment regarding the transport of cars and motor vehicles on board the company’s coastal cruise ships based on its experience with the first year of service and to explore the potential dangers. They retained Proactima AS, a management consulting firm, to carry out the risk analysis.

“This is a pure safety assessment, and the conclusion of the risk analysis shows that a possible fire in fossil vehicles will be able to be handled by the systems and the crew we have on board,” said Bent Martini, managing director of Havila. “A possible fire in electric, hybrid or hydrogen cars will require external rescue efforts and could put people on board and the ships at risk.”

The company highlights that the ships were built with the latest system and meet all safety requirements, but they believe the danger is too great from these new types of vehicles. They noted that the cruise ships are each outfitted with battery power systems, but that the battery packs are installed following current requirements for fire safety on ships including isolation in separate, fireproof rooms, with specific fire protection systems.

While the company will continue to transport fossil-fuel cars, they have also decided to limit the boarding and disembarking of private vehicles to only Bergen and Kirkenes, and not intermediate ports on the route. They said they would make exceptions for service vehicles for personnel who are doing necessary work on board the company’s ships and for emergency vehicles.

The company notes that its contract with the government does not require the transport of vehicles and that the ships have a limited capacity which they must make available for the contractual carriage of other cargo. Havila said testing during the past year shows that they were experiencing challenges in some ports based on variations in the tide and that they do not wish to risk damage to either vehicles or the ships when handling private vehicles.

The company said it will continue to explore future options to provide for the transport of alternate power vehicles.

Last year, insurer Allianz warned generally to the shipping industry of the increased fire danger. Their report warned about the potential dangers that lithium-ion batteries citing four main hazards, including fire, explosion, toxic gases, and the potential for thermal runaway from the transport of these batteries.

Operators of car carriers and a range of safety-oriented companies are doing extensive research into the requirements to improve fire safety for the transport of battery-powered cars. EVs are widely believed to have contributed to the fire 11 months ago that destroyed the car carrier Felicity Ace while the vessel was in the middle of the Atlantic.