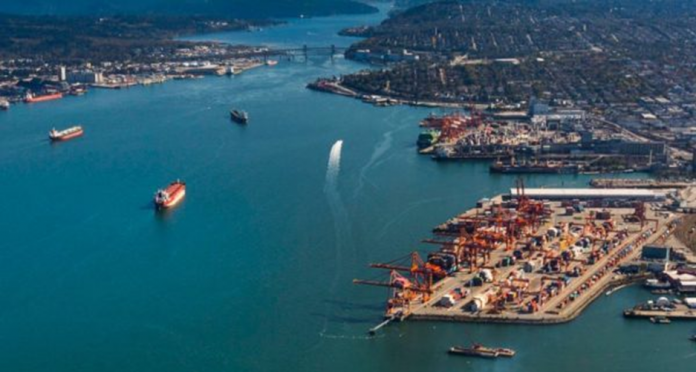 The Vancouver Fraser Port Authority is testing various low-and zero-emission fuels and technologies at the Port of Vancouver, as part of its efforts to phase out all port-related emissions by 2050.

Through the Low-Emission Technology Initiative, being implemented by the port authority and the Province of British Columbia, the parties have each committed $1.5 million in funding to support the transition to low-emission energy.

The projects are being implemented with partners from across the port community and include testing of battery-electric-powered terminal tractors; 100% biodiesel on commercial ferries; a hydrogen-powered crane; and 100% renewable diesel on a terminal locomotive and one of the port authority’s patrol boats.

“Charting our course towards a zero-emission port starts with collaborative efforts like these—between the port authority, the port community, and government—to test innovative new low-emission fuels and technologies that reduce emissions while keeping trade moving through the Port of Vancouver,” said Robin Silvester, president, and chief executive officer of the Vancouver Fraser Port Authority.

“We plan to continue taking tangible steps, in close collaboration with our partners across the port, towards our goal of phasing out all port-related emissions by 2050.”

Using renewable diesel can result in up to 80% less net greenhouse gas emissions than regular diesel on a life-cycle basis. Shell Canada, a partner on this project, supplied the renewable diesel and provided its technical expertise.

“Shell sees working with partners in hard to abate sectors, such as the marine sector, as critical to enabling our target of being a net-zero emissions energy business by 2050. We are working with customers and partners in the marine industry to help accelerate decarbonization towards a net-zero emissions future for shipping,” said Susannah Pierce, President and Country Chair, VP Emerging Energy Solutions Canada.

Across the Port of Vancouver, many other low-emission fuels and technologies are being tested by members of the port community, such as:

Viterra, which operates two grain terminals on the south shore of Burrard Inlet, recently began a 6-month trial of 100% renewable diesel on one of its locomotives at its Pacific Terminal. The trial, which is funded in part by the port authority and the province, is intended to test the use of low-emission renewable diesel as a replacement for regular diesel. Shell Canada supplied the renewable diesel.

At the UN Climate Change Conference (COP 27) earlier this month, DP World announced plans to invest up to $500 million across its businesses to cut CO2 emissions by nearly 700,000 tonnes over the next five years.

Seaspan Ferries, which operates a commercial ferry service between its terminals on Vancouver Island and the Lower Mainland, recently began running all six of its commercial ferries on 100% biodiesel, following the success of a pilot project launched last year. The company also recently began using 100% soy-based biofuel on its tugboat fleet and expects to transition to using biofuel on all its harbour ship-docking tugs before the end of 2022.

“At Seaspan Ferries, we are proud to be recognized as a leader in the utilization of advanced technology to reduce emissions. It is thanks to the support from the Port of Vancouver, that we were able to expand our use of 100% biofuel on our entire fleet, leading to a significant reduction in lifecycle CO2 emissions,” said Harly Penner, General Manager, Seaspan Ferries Corporation.

At Seaspan Ferries’ Tilbury Marine Terminal on the Fraser River, the company has also introduced two battery-electric powered terminal tractors, which were procured with funding support from the port authority and the province. All three of Seaspan’s shipyards have established a GHG baseline for emissions.

“We applaud our partners across the port community for their leadership in creating a more sustainable future at the Port of Vancouver. It’s fantastic to see so many efforts underway by industry to test and adopt new fuels and technologies that, together, will help pave the way towards creating a zero-emission port by 2050 while supporting our vision for the Port of Vancouver to be the world’s most sustainable port,” concluded Silvester.