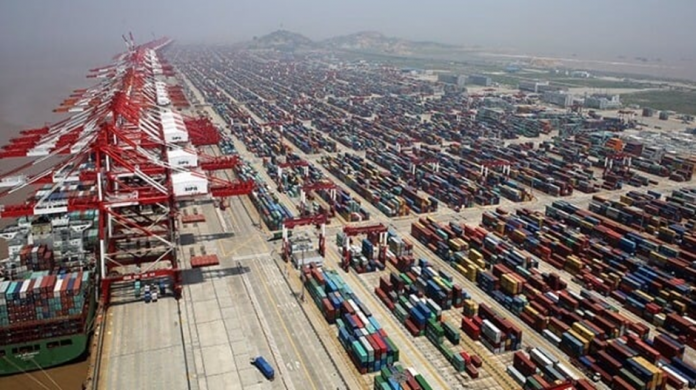 Shanghai retained its position as the world’s busiest container port for the thirteenth consecutive year in 2022 despite emerging challenges from other ports including in China and Singapore’s new Tuas facility which began operations in 2022. Preliminary figures from Chinese officials show that Shanghai’s overall container volume remained stable for the year which represents a significant recovery from the spring of 2022 when volumes were constrained by lockdowns in the city and restrictions on the movement of trucks and cargo.

Preliminary numbers released by the state-run media outlet Xinhua show that Shanghai handled a total of 47.3 million TEU in 2022. This compares with a total in 2021 of 47.0 million TEU or an increase of less than one percent.  By comparison, 2021 volume increased just over eight percent versus 2020.

Shanghai started 2022 strongly with a record 4.35 million TEU as exporters and carriers rushed to move containers before the start of the Chinese New Year holiday. Volume remained overall strong in the first quarter despite the holiday but in April the port was impacted by the start of an extended lockdown in Shanghai and the surrounding region as part of the country’s zero Covid policy.

Port officials reported that they were maintaining operations during the lockdowns by isolating workers within the port. However, factories were closed and truckers faced limitations on their movements. During April the port’s volumes fell to the lowest level of the year at just over three million TEU and just over 10 million TEU for the quarter.

They are highlighting the strong recovery during the third quarter of 2022. Volumes again exceeded 4.3 million TEU in July for another record month followed by over 4.1 million in August. During the quarter the port rebounded to over 12 million TEU. Volumes continued above 4.1 million TEU per month in October and November but fell to an estimated 3.8 million in December.

China historically has many of the top 10 ports in the world based on container volume. The facilities at Ningbo-Zhoushan continued to show strong growth in 2022. At the end of 11 months, port officials reported the twin facilities had reached over 31 million TEU with growth of nearly eight percent for 2022. Qingdao also reported strong growth of nearly eight percent to over 23 million TEU in the first 11 months of the year.

In the first 11 months of 2022, Chinese ports overall handled more than 210 million TEU. That represented an overall increase of over four percent for container volume.