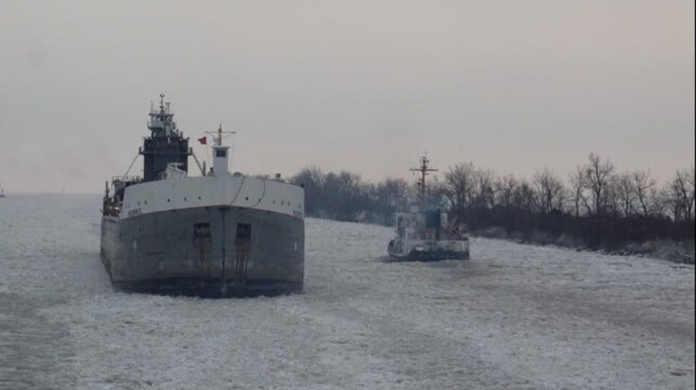 Days after announcing that they had begun the annual ice patrols and efforts to break the ice on parts of the Great Lakes and shipping lanes, the U.S. and Canadian Coast Guard reports they have already had to come to the rescue of more than 30 ships in unusually early ice conditions. Both Coast Guards are citing the effects of a strong winter storm that made its way through the region at the end of last week creating some of the worst snow and coldest temperature conditions experienced in the region in December.

Isabelle Pelchat, ice-breaking superintendent for the Canadian Coast Guard’s Central Region, told Canada’s CBC the recent storm led to the quick formation of ice in the western basin of Lake Erie, and the Livingstone Channel of the Detroit River.

“It had an effect that we hadn’t seen before at this time of the year,” Pelchat said. “The combined cold weather and the snow just created that ice formation, and it was spread very quickly.” According to the spokesperson, they were already recording ice up to two feet in thickness in some areas.

The Interlake Steamship Company’s James R. Barker built in 1976 as the first 1,000-footer on the Great Lakes became stuck overnight on December 29 in the East Outer Channel heading into the Detroit River.  The vessel, which is carrying 54,000 tons of taconite (a form of iron ore pellets) was forced to stop and wait for assistance from a coast guard vessel. The USCG cutter Neah Bay was able to reach the vessel along with three others that were stuck behind her. The Coast Guard was able to free the ice and escort the ships so that the convoy carrying taconite and sand got back underway.

It was the second rescue effort by the cutter Neah Bay. Assisted by the Canadian cutter Samuel Risley the two vessels conduct an escort mission on the Frontenac, Livingstone Channel also on December 29 after it was beset by ice ceasing movements in the maritime transportation system.

Normally, the coast guards said the annual ice-breaking mission begins in January. It normally continues until March or April to ensure that the traffic lanes remain open for commercial traffic and ferries. It is also critical to ensure access for safety operations. On Wednesday, December 28, the USCG received a report of two people stranded on an ice flow in Sturgeon Bay, Wisconsin. The local sheriff and the USCG deployed rescue boats to assist the people.