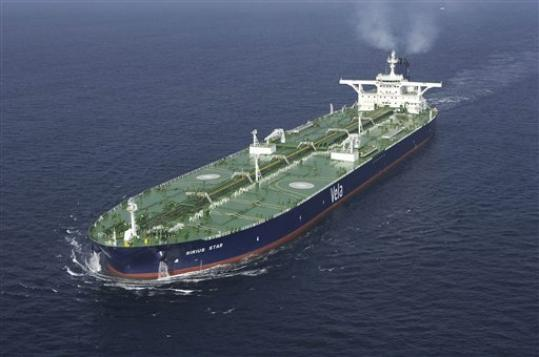 Cylinder lube oil consumption contributes to the large expenditure for the engine operation, & the reduction of cylinder lubrication is an important development theme. The motive is to reduce the cylinder lube oil dosage, while at the same time maintaining lubrication to assure a satisfactory piston ring/liner wear rate & maintaining, or enhancing, the time between overhauls.

MAN Diesel has attained this by improving the Alpha Lubricator system, which is a high pressure electronically controlled lubricator that injects the cylinder lube oil into the cylinder at the required position & time where the effect is optimal, which is not always possible with the traditional mechanical lubricators. Both for marine engines & engines for the power generation purposes, lower feed cylinder lube oil rates have been shown.

By applying a low oil dosage, about half of the usual emissions are lowered, & also less cylinder oil is wasted in the engine, where it could end up in the system oil, leading to increased TBN & viscosity.

At the beginning of the 1980s, MAN B&W Diesel performed NOx reduction tests using water-in-fuel emulsions. Before that time, the emulsifier was mostly considered for the homogenising of the fuel oil to disperse sludge & water remaining in the fuel after centrifuging.

Since 1984, long-term service experience has been available from the power plant engines, operating with up to 50% water added to the fuel to meet local rules.

Experience with the ultrasonic type & mechanical-type homogenisers has also been gained from the former MAN B&W research engine in Copenhagen(1L42MC) & on the Spanish island of Menorca(10L67GBE-S). Moreover, tests have been made on a 5S60MC engine with nearly 50% water added. Tests have been made on 4T50ME-X in Copenhagen(Denmark). These tests & the service results were all satisfactory, both with regard to the NOx reduction & engine performance.

The rather wide variations in the load & the high safety level required for marine vessels involve testing & system approval of the specially designed safety system. Therefore, a full-scale test installation is currently in service on an 11K90MC engine fitted on an APL container vessel. The test is expected to be finalised at the beginning of the 2009. The experience from the test & later operation covers our expectations with regard to the NOx reduction & operation of the units. For the 2-stroke engine, we have seen a 10% NOx reduction for each 10% water added.

In order to have the optimal spray into the combustion chamber, it is instructed that the water droplets in the fuel oil after emulsification are as small as possible. Both ultrasonic & mechanical types of homogeniser can be used to attain the same level of NOx reduction per water unit added without penalising the total engine performance.

But, if the engine is to be operated on diesel oil, it may be required to add additives to stabilise the emulsion. The location of the homogeniser in the fuel oil system is shown in the Figure. The same position is used regardless of whether the homogeniser type is mechanical, ultrasonic or high pressure injection.

The addition of water to the HFO by the homogenisation increases viscosity. To support the viscosity at the engine inlet at   10-15 cSt, max. 20 cSt, it may become essential to raise the temperature to more than the 150oC, which is standard today(max. 170oC at 50% water) &, accordingly, to raise the fuel oil loop pressure in order to prevent boiling of the water.

The water used for the emulsification must be demineralised to satisfy with the maximum limit for salt (NaCl) in the fuel. This is because the sodium can react with the vanadium in the fuel oil, so that particles or deposits of the vanadium can accumulate on the valve spindles & valve seats, thus resulting in leakages.

The water should be without other salts as well, & be clean so that operation will not result in fouling of injectors, exhaust gas components & boilers. It will be required to add an air driven safety pump & the drain tank to the system. The air driven pump will keep the system pressurised in event of black out. The drain tank is used if flushing of the system is required to remove water emulsified fuel. Both systems have been patented by the MAN Diesel.

The working principle of the high pressure injection system consists in spraying water into fuel by the special nozzle at 100 bar pressure at the nozzle tip.

The high pressure pump is frequency controlled, & can deliver the needed water amount at constant pressure at all times.

The SCR system is best suited for the steady high load conditions, i.e. SCR is less suited for the low load operation & manoeuvring in costal & harbour areas. The sensitivity of the chemistry between cylinder & fuel oil also shows limitations for tthe marine operation.

This is further emphasized by the need to fit the SCR reactor BEFORE the turbocharger due to required temperature regime.

Marine experience and challenges with SCR

SCR is the method for NOx reduction on the diesel engines today that can give the largest reductions. As mentioned, practically all NOx can be removed. But, some complications & limitations make it more difficult to apply SCR on marine vessels in the service. This makes it unfeasible to remove more than 90-95% of NOx due to the risk of ammonia slip.

If we compare the SCR installation on the new ships to a retrofitted SCR system it becomes obvious that it is far more intricated to retrofit the installation than to integrate SCR as the ship is being built.

With the SCR technique, the exhaust gas is mixed with the ammonia NH3 or urea (as NH3 carrier) before passing through the layer of a special catalyst at a temperature between 300 & 400°C, whereby NOx is reduced to N2 & H2O.

The reactions are, in principle, the following

NOx reduction by means of the SCR can only be carried out in this specific temperature window:

If the temperature is too high, NH3 will burn rather than react with NO/NO2.

If the temperature is too low, the reaction rate will also be too low, & condensation of ammonium sulphates will destroy the catalyst.

The design of the SCR catalyst is based on the sulphur content, temperature limits, expected dust content from the composition of the exhaust gas and the permissible pressure drops across the SCR reactor.

As a result, the SCR system will stop working within hours.

To maintain the temperature within the limits, the SCR catalyst should be located between the exhaust gas receiver & the turbocharger, so that the SCR catalyst can sustain the pressure at turbocharger inlet. Thanks to a high pressure at the inlet the SCR can be reduced in their size compared to catalysts on some medium & high speed engines, where the SCR unit is located in the exhaust gas funnel.

A process computer controls the amount of the NH3 or urea injected into the exhaust gas. The correspondence between NOx & the engine load is measured on the engine testbed.

Based on the results from the testbed, the process computer calculates & controls the NH3 feed rate. The ammonia dosage is subsequently regulated by the feed-back system based on the measured NOx outlet signal.

Otherwise, engines with & without SCR show the same performance & heat balance, and so they produce similar service results as regards safety, reliability & availability.

The SCR process is feasible on two stroke diesel engines with only minor impact on the engine performance, but with restrictions on the engine load, sulphur content, cylinder lube oil, and excess of ammonia (or urea).

The number of the SCR systems fitted on the 2-stroke diesel engines is still limited. Therefore, today an SCR system is specially designed for each main engine. Retrofitting is complicated & not suggested if the vessel has not been prepared for later SCR installation.

To prevent chemical compositions blocking the SCR, the sulphur content in the fuel oil used on the engines with SCR is important as is, in particular, the lower exhaust gas temperature limit at the inlet engine.

Moreover, some SOx will be converted to SO3 in the SCR catalyst & thus create visible smoke.

Calcium from cylinder lube oil can have an impact, so an excessive cylinder feed rate causing CaSO4 should be avoided.

When installing the SCR catalyst, it is important to compensate the exhaust pipe & the component support for vibrations & temperature changes.

Experience on ships & power stations indicates that a CEMS(Continuous Emission Monitoring System) can pose a challenge for the operators. Various CEMS equipment is on the market & many are in the process of further development. CEMS is expected to become obligatory equipment in connection with Tier III.