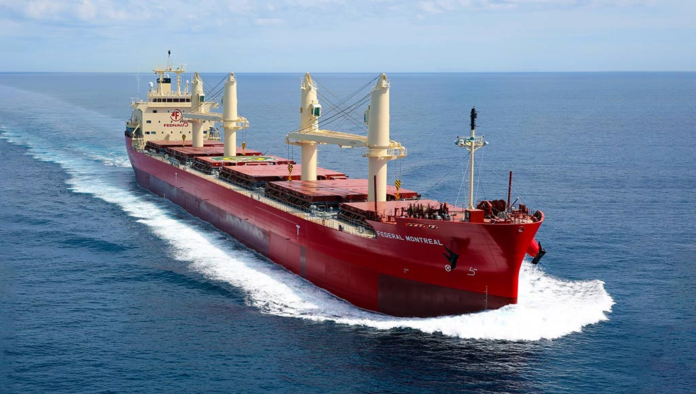 While it is realised that reduction of the NOx from marine engines up to 80% will be required, the complication of the SCR is also reduced.

New technology for the internal methods of NOx reduction is currently being developed & is expected to be matured for the market within 3-4 years. MAN Diesel promotes such techniques as exhaust gas recirculation & scavenge air humidification, & a possible combination of these also with water-in-fuel emulsification, are investigated further.

For both the exhaust gas recirculation(EGR) & the so called scavenge air moisturising(SAM) systems, the NOx reducing effect is attained by reducing the local maximum combustion temperatures in the combustion chamber, & by reducing the concentration of the oxygen, adding inert media with a high specific heat capacity, i.e. exhaust gas CO2 & water vapour. The NOx production only takes place at the very high temperatures (2,200°K & above), & it increases exponentially with the temperature. The EGR method is primarily depends on the reduction of the oxygen content in the cylinder charge, & the SAM method is partly based on decreasing the oxygen content of the cylinder charge, & partly on increasing the heat capacity of the cylinder charge by the addition of water vapour.

As discussed, these methods(EGR & SAM) have, by calculations & tests, proved their capability for the NOx reduction, but they have never before been developed to a commercial application level for the large 2-stroke engines. And they have not been fully optimized with regard to the cross over effects on the fuel oil consumption, heat load conditions & other emission parameters.

After careful evaluation & testing of the EGR & SAM methods, we concluded that the re-circulation on the high pressure side from the exhaust receiver to somewhere in the scavenge air system after the turbocharger compressor, with help from an EGR blower, would be the most suitable EGR solution.

Moreover, high pressure side water spray humidification would be the most appropriate SAM solution for our two-stroke engines.

The SAM system for saturation and cooling of the compressed air from the compressor side of the turbocharger has been tested from an engine performance point of view on the 4T50MEX research engine. The tests showed promising results with regard to the ability of reducing NOx emissions. However, long-term influence of the SAM system on engine components as well as operation with a salt content of up to 3.5% is being investigated.

Wallenius-Wilhelmsen Lines has, in their interest of the emission reduction, permits a full scale test on their vessel M/V Mignon in order to find the long-term impact in a marine environment. The M/V Mignon is installed with an 8S60MC engine. The SAM system needed, therefore, to be adapted to the existing engine construction and the installation was further limited by the available space in the engine room.

SAM system on the engine

The SAM system on the 8S60MC engine consists of the arrangement shown in Figs.

The SAM system has a seawater injection stage, where a surplus of seawater is injected for saturation and cooling of the hot air from the compressor. The sea water stage will provide nearly 100% humidification of the scavenge air & supply all of the water for the humidification.

The SAM parts in compressor air cooler arrangement(i.e. SW spray unit, S-bend & inlet box for FW1 and FW2) are manufactured from austenitic stainless 254SMO because of its excellent resistance against corrosion from the salt water.

The additional mass flows caused by the evaporated water through the turbines means that a substantial part of the exhaust gas has to be bypassed in this project. However, the energy of the bypassed exhaust gas could be utilized in a power turbine and provide operational cost savings for the operator as well as a reduction in the overall CO2 emission. The SAM system is, thereby, a NOx reduction method with a potential for improvement of the overall efficiency as well.

Cooling system for the air cooler

The cooling water inlet temperature for the air coolers in SAM mode can be raised by pumping water from the return line via a shunt pump, see Fig. The condensation of water for freshwater stage 2 can, thereby, be adjusted to the required level.

Control of the SAM system

The scavenge air moisturising system is controlled by a Programmable Logic Controller (PLC). The pumps and valves operate automatically depending on the status of the auxiliary system and the diesel engine. The auxiliary systems consist of 6 pumps and 13 valves, which are controlled on the basis of approximately 50 digital and analogue inputs. The failsafe situation of all of the pumps and valves are normal operation of the engine without SAM.

The auxiliary systems of the SAM system, are started up automatically when the engine load is 40-60% of SMCR. The freshwater stage 2 is started first, followed by the freshwater stage 1 and the seawater stage. As the last step, the scavenge air cooling will be changed over & the exhaust gas bypass valve is opened. The SAM system will, during stable engine operation conditions, be limited to control of the water level in the tanks by the yellow valves and pump. The SAM system is stopped in the opposite order of the start-up procedure.

Future of the SAM system

The principle of the SAM system is, in theory, a feasible way for reduction of the NOx emissions from a diesel engine. Nevertheless, other aspects, such as the impact on the cylinder condition by warm and humid scavenge air with salt, need to be investigated thoroughly prior to any release in the market. The test on the M/V Mignon will give valuable information on these aspects.

The first high pressure EGR test made on an MAN B&W two-stroke engine was the simplest possible set-up where the EGR system consisted of a gas line from the exhaust gas receiver to the position just after last charge air cooler, but before the last water mist catcher, so that the risk of fouling of sensitive parts was completely avoided. The simplicity was an EGR without scrubber cleaning of the recirculated exhaust gas. Some kind of cleaning of this gas was previously proved to be vital for the operation in order not to foul and damage the air cooler and receiver components.

The conclusion from this test is a considerable reduction of NOx, but it is doubtful whether the recirculated exhaust gas can be cleaned sufficiently before entering the air cooler and the scavenge air system.

Recently, MAN Diesel tested EGR with the scrubber & water treatment. This resulted in the reduction of up to 70%, with a relatively small penalty &, thereby, increase in fuel oil consumption. The next step was to perform a test on an engine in service.

Very encouraging operating conditions have been obtained during the tests.

The results from these measurements indicate that scrubbing reduces PM emissions to 20-25% (highest at low loads and lowest at high loads), and that HC and CO pass the scrubber nearly unaffected. The NO2 fraction of the NOx is, as assumed, dissolved in the water, & the NO fraction of the NOx passes the scrubber nearly unaffected.

Cleaning the exhaust gas with scrubber

Accordingly, MAN Diesel started designing a completely new scrubber specially made for the EGR up stream systems. The MAN Diesel designed scrubber is shown in the Fig. below Besides measuring engine performance, combustion chamber temperatures and emission data, extensive PM and SOx measurements were performed before and after the exhaust gas scrubber during the EGR test. These measurements confirmed up to 90% of the PM trapping efficiency in combination with up to 70% SOx removal, & absolutely no water carry over.

The performance of the EGR scrubber has proved so efficient that a test of evaluating the potential of this scrubber as after-treatment scrubber for two-stroke and four-stroke engines has been started.