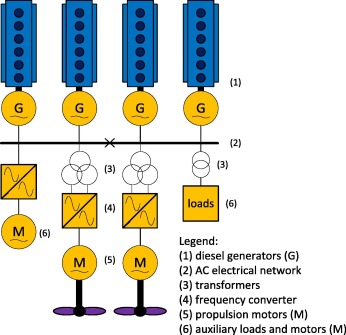 Q. Diesel Electric propulsion is now being chosen as the power plant for an increasingly wide variety of vessels.

a. Sketch a simple layout of such installation (6 Marks),

b. Explain the advantages of selecting such a plant. ( 10 Marks) Jan20

Ans: The electrical propulsion arrangement for the ship is often explained as a diesel-electric or turbo-electric system. It is characterized only by the type of prime mover. When the prime mover is a diesel engine, then it is known as Diesel-Electrical Propulsion.

There are two Types of Diesel Electric Propulsion

Modern SCR & frequency controlled systems have efficiencies approaching 97% in power conversion. The selection of one over the other is an application issue.

Lay Out of Diesel Electric Propulsion in Ships

Diesel electric propulsion is generally economical for a number of reasons:

1. Optimal utilization of fuel for the diesel engines to produce electrical power, even in partial load ranges.

5. Flexible & need-oriented use of diesel generator sets in combination power plant for drives & onboard power systems.

Diesel electric propulsion systems demonstrate high availability for the reasons that include:

1. Modular design with small probability of total loss of the propulsion power.

3. Proven technologies based on the decades of operating experiences.

4. Redundant drives with one propeller are also possible.

5. Designs are also possible for the maximum redundancy requirements.

Diesel electrical propulsion systems save the environment because the pollution emissions of diesel engines is decreased by operating the engine at the optimal speed and load ranges.

Diesel electrical propulsion is very convenient for the users, because of the following reasons:

3. Availability of maximum torque across the entire speed range at propeller.

1. Flexible arrangement of the components in ship.

4. Design & engineering of propeller is independent of the drive.

5. Flexibility in the choice of the diesel engine speed.

Q. Describe the working of a single phase full-wave rectifier with a resistive load. Draw the load voltage and current waveforms. (8 marks) July 2019

Figure below shows the waveforms of the input and output voltage of the full-wave rectifier. It can be considered as if rectifier flips the negative voltage to the positive side.

Q. With respect to circuit breakers:- (a). Compare the effectiveness of a current limiting circuit breaker with that of a HRC fuse (6 Mark) July 2019

Crawling- Sometimes, squirrel cage induction motors shows a tendency to run at very slow speeds(as low as 1/7 of their synchronous speed). This phenomenon is called as crawling of an induction motor. This action is due to the fact that, flux wave produced by the stator winding is not purely sine wave. But, it is a complex wave consisting a fundamental wave & odd harmonics like 3rd, 5th, 7th etc. In this case, motor will not accelerate up to its normal speed, but it will run at a speed which is nearly 1/7th of its normal speed. This phenomenon is known as crawling in induction motors.

Cogging- The phenomenon of Magnetic Locking between the stator & the rotor teeth is called  as Cogging or Teeth Locking. Even after applying full voltage to the stator winding, the rotor of a three phase induction motor fails to start/ rotate. This condition occurs when the numbers of stator & rotor slots are either equal or have an integral ratio. The number of the stator slots equal to or an integral multiple of the rotor slots, strong alignment forces is generated between the stator & the rotor. As a result of these forces an alignment torque greater than the accelerating torque with consequent failure of the motor to start. Thus, a locking is created between the stator & rotor teeth. This condition is called as Cogging or Magnetic locking.

(a). Draw a biological sewage treatment plant and explain the principle of operation. (8 marks) Jan20, July 19,

(b). Periodical maintenance and checks tests required to be done to verify the effectiveness of the above system. (8 marks) Jan20, July 19

(a) Biological Sewage Treatment Plant Raw sewage is passed to an aeration chamber and air is supplied through diffusers. This helps the action of aerobic bacteria which break down the sewage into carbon dioxide, water & inorganic waste. Figure below shows a biological sewage treatment plant.

Sewage then passes into the settling chamber. Any solids that settle out are returned via an air lift to the aeration chamber which assures that they are fully broken down. The sample applies to any surface scum. A small vane type air compressor supplies the air for the air diffusers & air lift.

The clear liquid then passes through the chlorinator where the liquid is disinfected, into the chlorination chamber. The chamber has float switches, which control the discharge pump, & a high level alarm.

Although the sewage treatment plant runs automatically, without regular maintenance the unit will not function properly & anaerobic bacteria may help in the formation of hydrogen sulphide & methane, both of which are hazardous.

The chambers required to be cleaned out occasionally to remove any accumulated matter. The aeration diffusers should be checked to assure they are clear & that air is bubbling from them. The air lift returns should also be checked to make sure they function correctly. These generally have a clear plastic pipe so that the sludge can be seen returning to the aeration chamber.

The internal tank coating should be checked for any signs of cracking or blistering. When cleaning out a sewage unit rubber gloves & a mask should be worn. After overhaul the external surfaces of the unit & surroundings are to be washed down with disinfectant. Hands should also be thoroughly scrubbed & overalls washed.

Q – With Reference to entry into enclosed spaces onboard:

i) Define “Enclosed Space” and give examples of enclosed spaces onboard. (4Marks) Jan 20

iii) Explain safety precaution taken prior to entry into enclosed spaces on board vessel. (8Marks) Jan 20

Answer: – i) An Enclosed Space is defined as any space of an enclosed nature

Where there is a risk of death or serious injury from hazardous substances or dangerous conditions such as lack of oxygen, toxic gas or other vapour, Limited openings for entry and exit, Unfavourable natural ventilation.

Enclosed space, as defined by IMO Resolution A.1050(27), means a space which

has any of the following characteristics:

ii) Describe hazards relating to entry into Enclosed spaces on board. (4 Marks)

Hazards relating to entry into enclosed spaces – There are 4 main hazards:

iii) Explain safety precaution taken prior to entry into enclosed spaces on board vessel. (8Marks)

Complete an enclosed space entry permits to work, confirming that

Q – Describe the checks done for the atmosphere inside enclosed spaces. (4 marks) April 2019.

Ans- In confined spaces there are a number of atmospheres that are hazardous :-

Toxic Gases- Assure that toxic gases are below the OSHA permissible exposure limit. Common toxic gases in a confined space could be hydrogen sulfide (H2S) & carbon monoxide (CO), but other toxic compounds could be present. RAE Systems offers monitors to assess all these gases either individually or simultaneously.

In a confined space, it is important to take samples at the top, middle, & bottom to locate varying concentrations of gases & vapors. Highly concentrated gases can collected at the top or bottom of a confined space depending on whether they are less or more dense than air. Dilute gases & vapors in the ppm range distribute evenly throughout a confined space. It is important to sample at a distance from the opening because air supply near the entrance can give a false sense of adequate oxygen presence. As the remote air monitoring is completed & the area is safe.