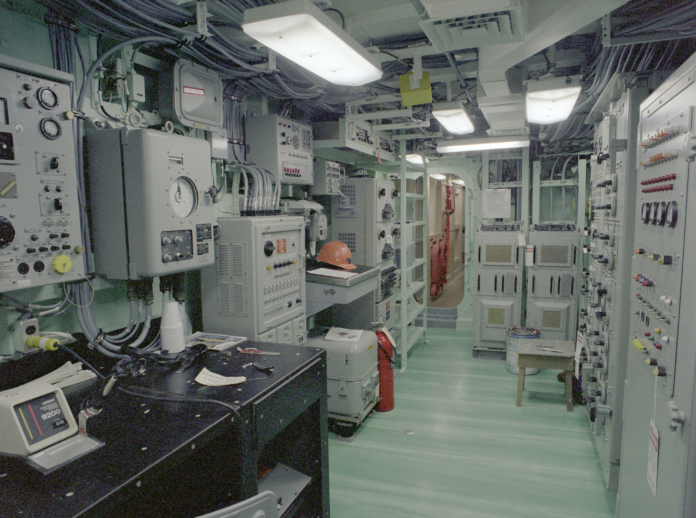 Q – Describe the different type of losses occurring in the power transformers?(8mark).

Stray losses- These losses are produce due to the leakage of magnetic flux in the transformer.

Q – With the aid of suitable line diagrams wherever required sketch and describe a suitable (MGPS) Marine growth protection system installed on vessel to prevent falling of internal sea water system mention the important precautions if any while handling the system.( 16 mark).

Ans- The Marine Growth Prevention System (MGPS) has been developed for the ships with the sole purpose of tackling marine organism growth, inhibiting it from depositing on the ship’s interior piping systems, which are continuously supplied with the sea water.

The three types of alloys used for the anodes are:

Aluminium Alloyed Anodes: This type is used in conjunction with copper alloy anodes to prevent corrosion throughout the ferrous piping system.

Ferrous Alloyed Anodes: They are used in conjunction with copper alloy anodes to prevent corrosion throughout Cu/Ni pipe work.

Anodes Mounted in strainers in the seawater pipeline: They have an advantage of replacing the anodes without affecting the seawater supply to the ship’s system.

Treatment tank setup with a spray nozzle in sea chest: In this system, a separate electrolysis tank with anodes is fitted which sprays the ion through the nozzle in the sea chest. This system is fitted on ships where sea chest or strainer mounting is not possible.

With the MGPS functioning properly, the systems using seawater will have following benefits:

Following points to be considered when working on the MGPS system in dry-dock:

Ans- A transformer is a static device which helps in the transformation of the electric power in one circuit to electric power of the same frequency in another circuit. The voltage can be raised or lowered in the circuit, but with a proportional increase or decrease in the current ratings.

The main principle of the operation of a transformer is mutual inductance between two circuits which is linked by the common magnetic flux. A basic transformer consists of two coils that are electrically separate & inductive, but are magnetically linked through a path of reluctance.

Electrical transformer has primary & secondary windings. The core laminations are joined in the form of the strips in between the strips you can see that there are some narrow gaps right through the cross-section of the core. These staggered joints are said to be ‘imbricated’. Both the coils have a high mutual inductance. A mutual electro-motive force is induced in the transformer from the alternating flux that is set up in the laminated core, due to the coil that is connected to the source of alternating voltage. Most of the alternating flux produced by this coil is linked with the other coil & thus produces the mutual induced electro-motive force. The so produced electro-motive force can be explained with the help of the Faraday’s laws of Electromagnetic Induction as

In short, a transformer carries the operations shown below:

1. Transfer of the electric power from one circuit to another.

2. Transfer of electric power without any change in the frequency.

3. Transfer with the principle of the electromagnetic induction.

4. The two electrical circuits are linked by the mutual induction

1. Step up and Step down Transformer

This type of transformer is divided on the basis of a number of turns in the primary & secondary windings & the induced emf.

The instrument transformer is further divided into two types

Similarly, current from phase B split at junction C into two equal components I3 and I2, I2 lagging behind I3 by 60º.

The flow of Positive Sequence Current – The phasor diagram of positive sequence components is shown in the figure below. When the load is in balanced conditions, then there is no negative sequence current. The current flows through the relay is given by the equation.

So the relay remains operative for a balanced system.

The flow of Negative Sequence Current – The figure above shows that the current I1 and I2 are equal. Thus, they cancel each other. The current IY flows through the operating coils of the relay. The current setting value of the relay is kept less than the normal full load rating current because the small overload current can cause the serious conditions.

The construction of the induction type negative phase sequence relay is similar as that of an induction type over current relay. This relay consists of a metallic disc normally made up of an aluminum coil, & this is rotating between two electromagnets the upper & the lower electromagnets.

The operation for Positive Sequence Currents – The current IR and IY flow through the primary windings of the relay. The current flows in the opposite direction. The current IR & IY are equal in magnitude. The balanced current kept the relay inoperative.

The operation for Negative Sequence currents – The negative sequence current I flow in the primary winding of the relay because of the fault current.

The relay starts operating when the magnitude of the fault current is more than that of the relay setting.