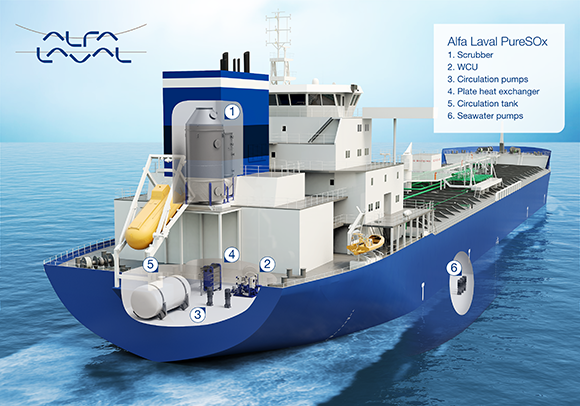 MAN Diesel cooperates with different companies developing seawater scrubbers for the marine application. Whereas the power plant market has had products available for years now for different types of exhaust gas scrubbing, the limitations in space on board a ship and the different engine load patterns require a different way of thinking.

There is currently about 4-5 different companies in the market for marine application, and the first plant has been installed on a ship for testing. Thus, tests have so far only been made on smaller marine engines. Scrubbers for large propulsion plants will require a different optimization of the design, and various companies have realized that only by designing in smaller steps will it be possible to later cover the total range of the engines onboard. The biggest challenge is the water amount, which seems to be quite large, and of course the fact that authorities specify limitations in the waste water being led back to sea.

MAN Diesel has tested a scrubber design that gave relatively high conversion figures and, thereby, a reduction in SOx and PM. A full scale test with this scrubber solution to see the adaptation of this technology to real life is about to be launched.

As can be seen in Table, MAN Diesel is involved in a number of different projects to investigate the possibilities for scrubbing exhaust gas while at the same time ensuring that the techniques developed will give a safe and reliable operation of the main engine and, thus, the ship.