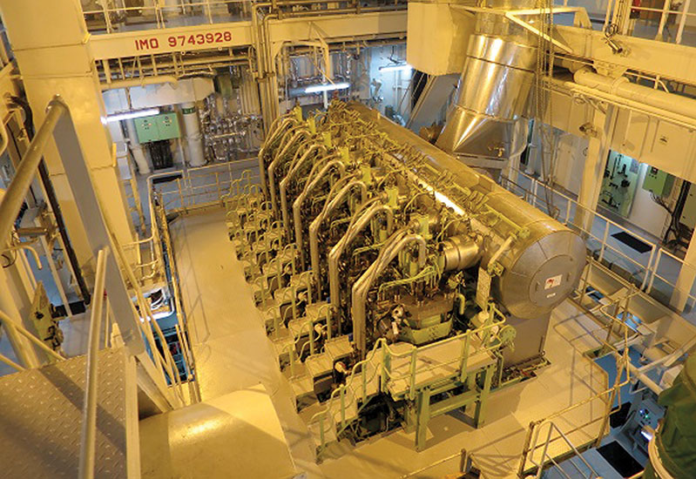 The MC/ME engine is a well-proven product in the industry, with more than 15,000 engines sold since 1982.

The GI(Gas Injection) solution was developed in parallel & was finished for testing at the beginning of the 1990s. In 1994, the first engine, the 12K80MCGI-S, was started up on a power plant and has since operated as a peak load plant with more than 20,000 service hours on high-pressure gas.

At the same time, all the major classification societies approved the GI concept for stationary & marine applications.

Recently, diesel and dual fuel engines have been introduced to the market for LNG vessels as prime movers, and MAN Diesel has sold 90 sets of S70ME engines as prime movers for Qatar gas vessels. Technically, there is only little difference between the fuel and gas burning engines, but the GI engine will provide an optimal fuel flexibility. Fig.1 illustrates the necessary component changes.

The thermodynamic condition in the combustion chamber is kept similar to that of the fuel burning when applying the 250-300 bar gas injection.

This gives trust from the known performance of the proven diesel technology through many years.

Unlike other dual fuel solutions, the MEGI has no limitation whatsoever in the use of natural gas quality, except that condensation in the system is not allowed. When operating the ME-GI engine, there is no derating and knocking due to the gas pressure and air flow, and general working principles of the two-stroke engine remain unchanged.

The gas system, including compressor, engine, piping, etc., has undergone three Hazid/Hazop investigations, explosion studies in the engine room and piping, and volume tests to eliminate all possible risks on board.

Compared with the HFO operation, gas gives a cleaner exhaust. Having very low or no sulphur, the SOx sulphur oxides are negligible in the exhaust gas, see Table.

The particulates will be reduced considerably as well as the emission of NOx and CO2.

The ME-GI technology is not limited to the LNG carrier application. Investigations are in progress to see what is necessary. for other types of vessels. Container vessels & bulk carriers may also operate on LNG. Again, the argument is the relatively lower price seen for the LNG, compared with HFO, combined with the improved emission values.

The gas can be evaporated to a compressor and be compressed to the 250 bar needed at the engine inlet or, by liquid pumps, be pumped up to the 250 bar and evaporated before going to the engine. Both solutions are available & known, & tested equipment is on the market.