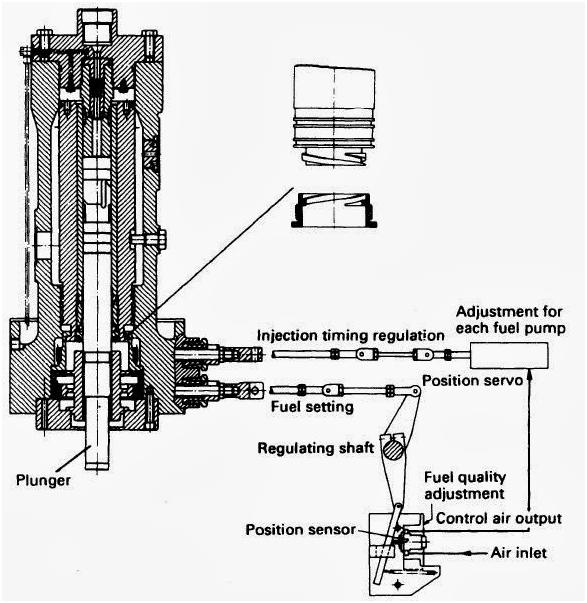 In the interests of rational operation, the optimum functioning of VIT fuel pump systems is of great importance. In realization of this, we have drawn-up the following guidelines, in the hope that they will contribute to a better understanding of the practical adjustment of the pumps.

The instruction is divided into four main sections:

The “super-VIT” (Variable Injection Timing) system, is developed to fulfil the requirement of maintaining the MCR Pmax under part load conditions, in order to save fuel.

This is achieved by a mechanism which automatically adjusts the commencement of fuel injection, such that the MCR Pmax is kept constant as the engine load is reduced from 100%, down to a certain pre-specified part-load, known as the break-point.

In the super-VIT configuration*, employed on the larger L/K/S-MC engines, and which is the subject of this instruction, the fuel pump plunger is not profiled (i.e. has no extra oblique-cut) but instead, the start of fuel injection (timing) is freely determined by altering the vertical position of the pump barrel, whereby in this system the break-point is fully adjustable.

The pump barrel is moved up & down (relative to the plunger) by means of a rack and pinion, in combination with a double-thread (Fig. 1). The VIT-rack setting itself is controlled via the regulating shaft position i.e. according to the engine load.

When running at the break-point, the pump cylinder will be at a low position, i.e. giving early injection and the specified design Pmax (MCR Pmax) for the engine in question.

In the case of the “conventional-VIT” system (i.e. the profile-plunger principle, as used on GB & L35MC + L42MC engines) the break-point is fixed in relation to the pump index – that is to say, the “break” always automatically occurs at the predetermined pump index. Regarding details of this system, we refer to other instructions.

Referring to the position sensor unit on the emergency stand, figs. 2 and 3.

The beam (A) is connected to the regulating shaft (fuel pump index control shaft) via the regulating arm (8) jointed at (C). The VIT-system is “out-of operation” at low loads. This is in order to avoid frequent changes of pump lead (VIT-index) during manoeuvers.

At zero load, the beam (A) is fully lifted, and the position sensor (D) gives zero control pressure to the position servos at each fuel pump, such that a delayed injection timing is achieved (compared with an engine without super- VIT).

As the engine load is increased, this late injection mode continues until the beam (A) has made contact with the sensor pick-up (E), & the resulting control pressure reaches 0.5 bar. These points are shown in the figs. 3a & 4.

When the engine is then run-up towards approx. 85% MCR, the sensor pick-up (E) is further activated, thus gradually increasing the control pressure. This injection timing as the 1sado increases, thus tracing line 1-11 in Fig. 4.

At approx. 85% MCR, the maximum combustion pressure reaches the specified design Pmax for the engine. At this load, the beam (A) touches both supports (F 1 & F2), and the sensor pick-up (E) is fully depressed, as shown in the Fig.3b.

If the engine load is then increased above 85% MCR, the beam (A) will rotate around support (F1), thereby reducing the depression of the sensor pick-up (E), see also Fig.3c. Correspondingly, the control pressure from the sensor causes

the VIT-rack position servos to retard the injection timing at a suitable rate, thereby keeping a constant maximum combustion pressure between approx. 85% MCR and 100% MCR.

Fig. 5 further illustrates how the various parameters vary, as the load is increased from zero to MCR.

As mentioned, the super-VIT mechanism only operates at control air pressures greater than 0.5 bar. The actual starting-point is pre-adjusted by the engine builder, and no further adjustment should be necessary.

Although it is the regulating shaft which determines the VIT-rack positions, two forms of intermediate adjustment are available (Fig. 6):

A) Individual Pmax adjustments (at each fuel pump).

B) Collective Pmax adjustment (simultaneously for all pumps).

Both of these adjustment modes can be utilized while the engine is running.

Re A) Individual adjustments at each separate fuel pump are nade in order to balance the Pmax values (i.e. the same maximum pressure in all cylinders, +/- 3 bar). This can be done by two methods:

Re B) Collective adjustment: for the engine as a whole is made at the position sensor unit on the emergency stand. The actual adjustment procedure will depend upon the condition to be corrected.

There are two main conditions that can require re-adjustment:

Changed fuel quality: if a fuel is bunkered, having essentially different combustion characteristics, Pmax might change. In such a case, in order to maintain low SFOC, or to avoid running the engine with too high combustion pressure, the injection timing should be changed. This is done by loosening the bolts (G) (Fig. 2) and turning the adjustment-screws (H), such that the location of the sensor (D), relative to the beam (A), changes in the desired direction. This operation, which can be done while the engine is running, changes the control pressure level, thereby causing all fuel pumps to be advanced (= higher Pmax) or retarded. See also Fig. 7.

Worn fuel pumps, or significant changes in fuel LCV on volume basis: both of injection timing. In order to compensate for this, the following adjustment is carried out.

Stabilize the engine at 85% load. The arm (B) is then loosened, and retightened in such a position that the beam (A) touches both supports (F1 and F2). This brings the Pmax break-point back to 85% MCR.

After this the engine is stabilized at MCR, and the position of the support (F1) is ad justed, so the Pmax is equal to the value at 85% MCR (see also Fig. 7).

The following describes the adjustment procedure necessary if the fuel cams have been moved.

1) With the VIT-rack arms disconnected, run the engine up to 100%. Move the VIT-racks manually, until Pmax values are equal for all cylinders (100% Pmax +/- 3 bar). Fix the VIT-racks in these positions (tie, or clamp, etc.). Note the individual VIT-rack indexes.

2) Then reduce the engine load to the break-point *, and again adjust the VIT-racks manually, until the Pmax values are equal for all cylinders. Note again the VIT-indexes.

4) Stop the engine and, if necessary (f.inst. in the case of worn pumps), move the fuel cams such that all VIT-index’s have nearly the same values (+ 1/2)

**. See Appendix 1 for an example regarding setting of the cams.

This is a practical guide for adjustment purposes. However, due to possible differences in injection system wear, larger values may be acceptable in service, as long as full-index is not obtained at the break-point, or zero index does not occur at overload.

5) Re-start the engine and run up to the break-point. Referring to Fig. 2, loosen the arm (B) and retighten it in such a position that the beam (A) touches the two supports (F1) and (F2).

6) Then check Pmax level for all cylinders, and if necessary make collective adjusting screws (H). See also Fig. 7. Afterwards ret ighten the bolts (G). this, loosen the bolts (G) and move the sensor valve by means of the adjustment (to 100% Pmax) by moving the position sensor valve (D). To do

A non-return throttle valve ***) is mounted in the control air line, between the position sensor valve and the position servos, see Fig. 6. This valve has two main functions:

1) To prevent excessive combustion pressure during sudden load reductions in the upper load range (i.e. above the break-point), for example in rough sea conditions.

2) To avoid rapid fuel-rack oscillations from being transmitted to the VIT-rack (i.e. to obtain a stable VIT-rack, for instance in case of slight governor jiggling).

Before, or during, shop and sea trials, the non-return throttle valve is temporarily adjusted such that the trials can be conducted without inconvenience.

The initial adjustment ***) of the valve is carried out as follows: (this can be done with either stopped or running engine).

b) By means of the handwheel on the emergency stand, adjust the fuel-rack position until the maximum control air pressure can be read on the pressure gauge (i.e. corresponding to the break-point pressure).

c) The throttle screw is then turned towards the closed position (clockwise = cw) until the pressure starts dropping. At this point the screw is turned one revolution back (counter-clockwise = ccw).

NB If the position servos and piping have no leakages, it may prove possible to close the throttle screw completely, without observing any drop in pressure. Therefore, during the above adjustment, it may be necessary to introduce a small leakage at the position servo (i.e. loosen a pipe connection).

The final adjustment is completed during the maiden voyage.

In order to judge the setting and effectiveness, the following stability criterion should be used:

***) NB: On some engines a simple throttle piece (non-adjustable) is fitted instead of an adjustable throttle valve. In such cases, the orifice hole will have been correctly dimensioned on testbed.

Due to leakages or maladjustment in the VIT-regulating system, it may, in the course of time, be necessary for the crew to re-adjust the throttle valve setting. If, f.inst., the VIT is hunting, we recommend that the following is done:

a) The throttle valve screw is opened fully (max. ccw).

b) Then the setting is re-adjusted as described in section 3.1 above.

c) The stability is then checked using the mentioned criterion.