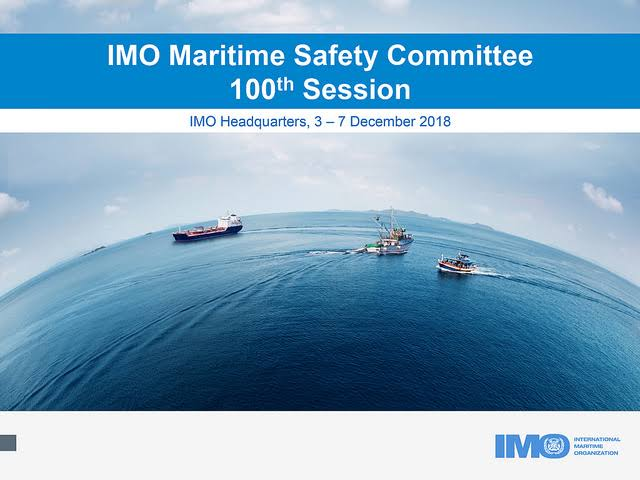 The MSC accomplished its milestone 100th session, with evolution in the regulatory scanning drill on maritime autonomous surface ships; acceptance of updated recommendations on fatigue & further upgrade on work on goal based standards, polar shipping & safety issues associaed to the low-sulphur fuel.

A significant session summons speakers who reviewed future technologies & the consistent role of the seafarer. A new IMO safety video was introduced, showing the wide scope of the work the Committee has done over 6 decades to improve safety & security at the sea, together with navigation, cargoes, ship construction, seafarer training, search and rescue and communications and more.

Following testing of the methodology by a correspondence group, the MSC approved the framework and methodology for the regulatory scoping exercise on Maritime Autonomous Surface Ships (MASS).

For each instrument associated to the maritime safety & security, & for each degree of autonomy, provisions will be identified which:

The degrees of autonomy recognized for the purpose of the scoping exercise are:

Once the first step is completed, a second step will be performed to inspect & find the most suitable way of addressing MASS operations, considering, inter alia, human element, technology & operational factors. The analysis will identify the need for:

The initial analysis of the instruments under the influence of the MSC will be performed during the first half of 2019 by a number of volunteering Member States, with the support of concerned international organizations.

An inter sessional MSC working group is anticipated to meet in Sept. 2019 to move forward with the process with the motive of completing the regulatory scoping exercise in 2020.

Development of guidelines on MASS trials

The MSC noted provisional principles for the development of guidelines on MASS trials, discussed by a working group. The principles include ensuring that such guidelines should be generic and goal-based, and taking a precautionary approach to ensuring the safe, secure and environmentally sound operation of MASS. Interested parties were invited to submit proposals to the next session of the Committee, taking into account these principles.

Following the acceptance of Goal based ship building standards for bulkers & oil tankers(GBS) & the efficient initial evaluation of 12 Recognized Organizations by the IMO GBS audit teams at previous sessions, the MSC fixed that the data submitted regarding the maintenance of ratification by those 12 ROs showed consistent conformance with the Standards (this covered all IACS member recognized organizations, except for DNV-GL, a classification society formed as the result of a merger between DNV and GL, which would be subject to a re-verification audit of its rules.)

The Committee, having considered the initial verification audit report of a further recognized organization, Turk Loydu, confirmed  that the information provided by Turk Loydu had demonstrated that its ship construction rules conform to the Goal-based Standards.

The experience gained in conducting GBS audits has highlighted the need to update the procedural requirements guiding the audits. The MSC therefore accepted updated recommendations for ratification of conformity with goal based ship building standards for the bulk carriers & oil tankers, to come into effect 1 year after adoption (1st Jan. 2020).

The Committee considered a request from the Sub-Committee on Ship Systems and Equipment (SSE) for advice from the Committee in respect to difficulties encountered in drafting goal-based regulations for onboard lifting appliances and anchor handling winches (OLAW). Following the analysis of the request, the MSC agreed to modify the Generic recommendations for forming IMO goal based standards (MSC.1/Circ.1394/Rev.1) so as to assist their application by the bodies of the Organization. The MSC summons Member States & international organizations to submit presentation in this respect to MSC 101

The MSC accepted updated recommendations on fatigue, which provide complete information on the causes & result of fatigue, & the risks it present to the safety & health of seafarers, operational safety, security & protection of the marine environment. The aim is to assist all stakeholders to contribute to the mitigation and management of fatigue.

IMO has take into consideration the issue of fatigue for several decades, accepting Assembly resolution A.772(18) on Fatigue factors in manning & safety, in the year 1993. This was ensured by the development of complete recommendation on fatigue mitigation & management (MSC/Circ.1014), which was issued in the year 2001. The guidelines have been thoroughly reviewed and updated by the Sub-Committee on Human Element, Training and Watchkeeping (HTW 5), taking into account the latest research studies.

SAFETY OF SHIPS IN POLAR WATERS

The Committee considered how progress forward with developing possible obligatory policies for the ships sailing in the polar waters which are not currently under the Polar Code. A road map was accepted, which could see update to the SOLAS & the Polar Code considered for acceptance in 2022.

MSC 99 had already instructed the Sub-Committee on Ship Design and Construction (SDC) to consider recommendatory safety measures for fishing vessels of 24 m in length and over, with a view to alliance with the 2012 Cape Town Agreement; & pleasure yachts above 300 gross tonnage not engaged in trade (in both cases, for those operating in Polar waters). At this session, the Committee review the wider use of the Polar Code chapters 9 (Safety of navigation), 10 (Communication) & 11 (Voyage planning).

Introductory draft text which would increase the implementation of the Polar Code to all the ships to which SOLAS chapter V (Safety of navigation) applies was accepted, for further review. Member States & international organizations were summon to submit data to the MSC 101 that will aid to find the viability & consequences of applying the conditions in chapters 9 (safety of navigation) & 11 (voyage planning) of the Polar Code to non SOLAS ships, in order to develop the work at the next session.

The Committee also accepted that, in the meantime, a resolution could be formed as an interim methods & invited applicable proposals to the next session (MSC 101).

The Polar Code is obligatory for certain types of ships under the SOLAS & MARPOL Conventions. SOLAS chapter V (safety of navigation) in principle applies to all ships on all voyages while the application of the SOLAS chapter IV  also extends to cargo ships of 300 gross tonnage(GT) & upwards, as opposed to the general SOLAS application to ships of 500 gross tonnage (GT) & above. SOLAS does not applies to some specific types of ships, comprising cargo ships of less than(<) 500 gross tonnage(GT); pleasure yachts not involved in trade; ships of war & fishing vessels (sometimes termed “non-SOLAS ships”).

The Committee decided to include in its plan for the MSC 101 a new item on “Development of further policies to improve the safety of the ships associated to the use of fuel oil”. This ensured the analysis of submissions regarding the potential required for the guidance & advice regarding possible safety issues associated to the application of the 0.50% limit of the sulphur content of fuel oil(outside emission control areas).  At the same time, the Committee approved the view that, while fuel safety was a longstanding prevailing responsibility which required to be carefully tackled, this should not affect Member States’ commitment to enforce the 2020 sulphur limit from the date of application (i.e. 1st Jan. 2020).

Member States & international organizations were summoned to submit tangible proposals to the MSC 101 under the new output. The range of the work was accepted as follows: “Based on the analysis of the existing safety provisions for fuel oil & information regarding the safety indication linked with the use of the fuel oil, develop further procedures to improve the safety of ships concerning to the use of fuel oil”. The target completion date is 2021.

The new 0.50% limit (decreased from 3.50% currently) on the sulphur content of ships’ fuel oil, which will enforced on 1st Jan. 2020 under IMO’s MARPOL agreement, will greatly benefit the environment & human health. The Marine Environment Protection Committee MEPC 73) in October summoned the MSC to discuss appropriate safety issues related with the use of low-sulphur fuel oil, following the Intersessional Meeting on Consistent application of the regulation 14.1.3 of MARPOL Annex VI (ISWG-AP 1).

The MSC agreed that a joint-MSC-MEPC circular on ensuring fuel suppliers deliver compliant fuels should be developed by the Sub-Committee on Pollution Prevention and Response (PPR 6),  with a view to be accepted by the MEPC 74 & MSC 101.

The MSC also recognized the capability of the industry organizations to develop instructions to address potential safety & operational issues associated to the supply & use of the 0.50% sulphur fuels. This instructions is expected to be submitted to PPR 6 for consideration.

The Committee agreed to hold in pending the acceptance of the amendments to revise the International Code on the Enhanced Programme of Inspections during Surveys of the Bulk Carriers & the Oil Tankers, 2011 (2011 ESP Code), pending further work on the new consolidated Code by the Sub-Committee on Ship Design and Construction (SDC 6), which is expected to be accepted by the IMO Assembly at its 31st session..