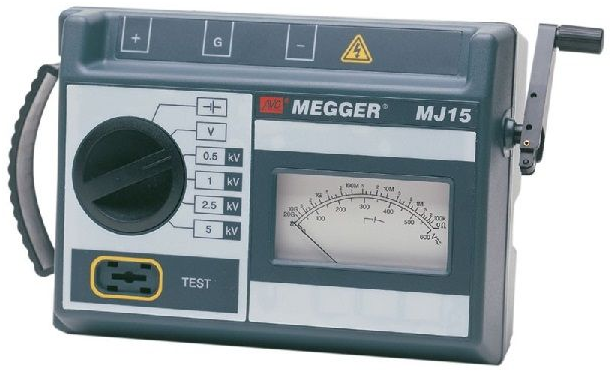 Q. Why is a Megger used for insulation test and not a multi meter?

Ans– With a megger,a voltage of not less than 500 volts DC is used for testing the insulation resistance of windings. With a multi-meter, the voltage used is not more than 3-volts DC. Megger uses high impedance testing and is therefore more accurate than a multimeter

Q. How do you test reverse power trip?

Ans– When two generators are running in parallel & one generator can carry the load, reverse power trip can be tested by load shifting using governor control. When the load has shifted sufficiently & the off loaded generator is carrying a small percentage of load, its breaker trips & fuel supply to its prime mover cuts off. This means that the reverse power relay has operated. The relay can be tested by the simulation (using the test push button on the

relay) to see if it initiates a trip signal. Simulation & actual both can be used to test. In actual change controls to manual. Reduce load one one gen & increase on other.

Q. How is the speed of a DC motor varied?

Ans– To vary the speed of a DC motor we need a constant voltage power supply with a series POT resistor of higher watt rating. A Pulse Width Modulator (PWM) can be used.

Q. What does three-phase current mean?

Ans– Three current sinusoidal waveforms equal in magnitude but with a

Q. After a black out the emergency generator comes on; On restoring the main supply we are closing the circuit breaker of the main generator without bothering about synchronizing. How is this possible?

Q. How is the speed of a 3-phase induction motor varied?

Ans– The speed of the normal 3-phase induction motor is a function of frequency of the supply voltage. Changing the speed of such a motor hence need building a three-phase power frequency convertor. This can be realised by using power MOSFETs (or IGBTs) capable of handling high voltages & fast switching speeds.

Q. What safety precautions need to be taken during maintenance on batteries?

Ans– The room required to be ventilated to prevent explosions due to gases generated by the battery. Protective clothing, gloves & eye protection should be used to prevent acid splash over. No flames or ignition sources should be brought near the batteries. Never short both positive & negative terminals as this will cause short circuit & high energy flashover. When disconnecting the batteries, always disconnect negative terminals first & vice versa when reconnecting.

Q. Explain the condition for the Paralleling of Alternators?

Ans– The following conditions must be fulfilled for the proper synchronizing of alternators.

Q. If you get an earth fault alarm what will you do?

Ans– The fault can be investigated by first identifying areas of ship that have a high chance of earth fault (example deck lighting or pantry equipment) & then switching off their supplies one at a time to see if the alarm is gone. When a particular load clears the alarm, we know that that circuit is having earth fault & we can go &  repair it.

Q. How does current flow during welding?

Q. What is an AVO meter?

Ans– The Avometer was a British brand of the multimeter, latterly owned by the Megger. It is often called simply an AVO &  derives its name from the first letter of the words amperes, volts, ohms

Q. What limits the electrical load?

Q. What is the meaning of saying I & V are in phase?

Ans– The angle between the I & V waveforms is zero which means the load is purely resistive.

Q. Where is it used?

Ans– Synchronous motors find applications in all industrial applications where constant speed is required. Improving the power factor as Synchronous condensers. Electrical power plants almost always use synchronous generators because it is important to keep the frequency constant at which the generator is connected. Low power applications include positioning machines, where high precision is needed, & robot actuators.

Q. What are the differences between synchronous & induction motor?

Ans– Synchronous motor : Constant speed on all loads, can be operated on a wide range of power factors, not self starting, requires dc excitation.

Q. What are the safety precautions when working on electrical equipments?

Notice board : Do not switch on – Men at work, stand on the rubber mat, remove metal rings, watch bracelets, use proper insulated tools, check power supply with the voltmeter & double check the voltmeter with known power supply, keep one person stand-by with proper safety gears, inform authority & get proper work permit. In case of the electrical shock, give proper first aid, check heart beat and pulse.

Q. Why is special lighting used in battery rooms?

Ans– Spark proof lighting is used as explosive gases may be produced during battery charging & so there should be no sparks in the room.

Q. Where is a slip ring used and where is a commutator used?

Ans– Slip rings are commonly found in the slip ring motors, electrical generators for alternating current systems & alternators. They can be used on any rotating object to transfer the power. A commutator is a common feature of the direct current rotating machines. By reversing the current direction in the moving coil of the motor’s armature, a steady rotating force (torque) is generated.

Q. When does Reverse power flow?

Q. What protection is provided against this?

Q. What is special about Steering gear Overload safety?

Ans– Short Circuit protection & were appropriate-single phase protection is installed. In addition instead of over current protection an Overload alarm is fitted set to operate at not less than twice normal running current.

Q. What is rms value?

Q. How is the protection against reverse power given?

Q. Where does reactive power go?

Ans– Reactive power is not lost. It is delivered to the motor where it sustains the electric field that enables the motor to convert the real power (electrical) into the mechanical torque.

Q. What is the meaning of preferential trip? Why is it provided?

Ans– Preferential trip is a kind of the electrical arrangement on ship which is designed to disconnect the non-essential circuit i.e. non-essential load from the main bus bar in case of the partial failure or overload of the main supply. It lets the critical loads run (like steering gear) & trips the non essential loads (like AC and galley) & is a safety feature