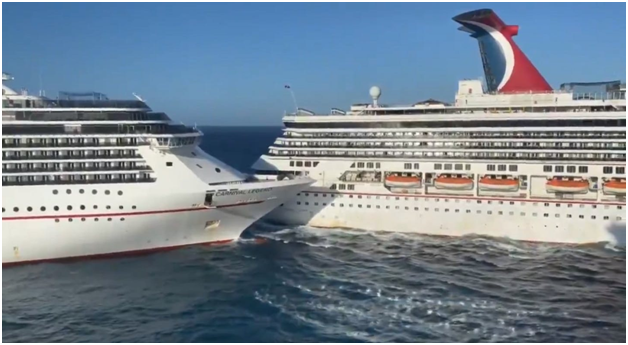 Q What is crash maneuvering?

Ans– The crash maneuvering is usually done to avoid any type of collision or crashing of ship to any other ship or structure (Jetty, land, Iceberg etc). In this type of maneuvering the main engine is subjected to severe stress and loading, but the safety of ship and life is assured.

Q How to Perform Crash Maneuvering

Ans– Crash maneuvering is turning the engine in opposite direction to reduce the heading speed of the ship. After certain time, the ship stops & starts streaming in the astern direction. This is done by supplying starting air at about 30 bars from the air receiver to the main engine. The stopping air is known as brake air.

The brake air when suddenly injected in to the engine cylinder, will try to resist the motion of the piston & the rotation of the crankshaft & propeller.

Q Difference between RTA and SMC

Q Difference between MEB and MC-C

Q Conversion from RTA to RT-Flex

Q Conversion from MC to ME.

2. Remove Chain Drive of the engine.

5. Provide system oil at 200 bars for operating HCU of each cylinder unit via the cylinder control system.

7. Attach a Tacho system unit in the crankshaft which gives engine speed signal to the CCU.

8. All these added systems are controlled by the electronic main operating panel via solenoid valves & electronic signals.

Copper (Cu)- 4% – To segregate and hold the antimony cubes in tin matrix.

e. Steel back strong enough to take the load.

f. It does not have Nip

g. They can be wipe out at temperature of  750C

h. Held in position with the help of guided screws which passes through the upper and lower shells

i. Having Lip all over the circumference for easy seating

j. Can be repaired

k. No compactness to engine

Tri metal bearings- They are of 3 main layers and then a steel backing shell.

Shell (bottom)- it is backing shell for shape & support

d. Vertical distance are predetermined and can not be adjusted afterwards

e. Wall thickness of 2-2.5% of the journal diameter

f. Having guide screws in lower shell only

g. Should be fully supported for the full length as no strong steel back

h. It has Nip circumferentially

j. They can be wipe out at temperature of 1200C

k. Can be only replaced not repaired

The thrust bearing is lubricated from the pressure lubrication system of the engine. The oil is supplied between the segments through spray pipes & spray nozzles.

Q How Can Air Line Explode

Ans– For a fire to happen, it has to complete the 3 sides of the fire triangle namely-Heat, Fuel & Air. In an air starting system of the main engine, fuel may be present in the form of lube oil carried over from the air compressor. Moreover, oxygen is present in the system in abundance. The heat source may come from a leaking starting air valve installed on the cylinder head & the combination of these three in proper ratio will lead to an air line explosion.

Relief Valve- sulzer: It is installed on the common air manifold which supplies air to the cylinder head. Generally installed at the end of the manifold & it lifts the valve in the event of excess pressure inside the manifold. The advantage of the relief valve is it will sit back after removing the excess pressure & thus continuous air is available to engine in case of manoeuvring or traffic.

Bursting Disc-man b&w: It is installed in the starting air pipe & consist of a perforated disc protected by a sheet of material which will burst in case of the excessive pressure caused due to air line explosion. It also consist of a protective cap such constructed that if the engine is required to run even after the disc has been ruptured, the cap will cover the holes when it is turned. This will assure that in manoeuvring or traffic air is available for engine at all time.

Non Return Valve: Positioned in between the Air Manifold & Air Receiver, it will not allow the explosion & its mixture to reach the air bottle because of the unidirectional property of the N.R. valve.

Flame Arrestor- sulzer: It is a small unit consisting of several tubes which will arrest any flame coming out of the cylinder through leaking start air valve. It is installed on every cylinder before the start air valve.

Q For prevention of the starting air line explosion following measures to be performed: