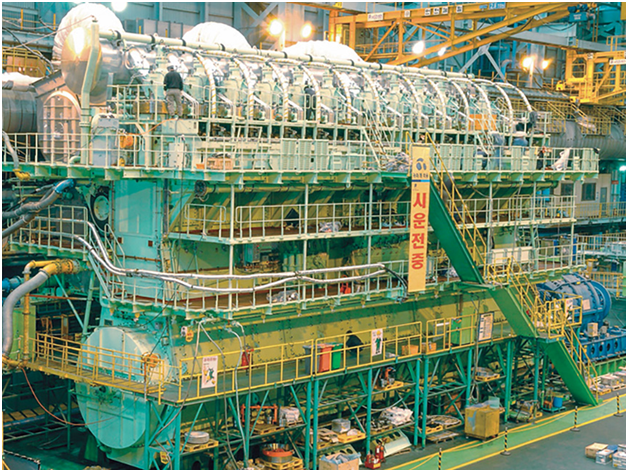 Safety precautions and preparations before going for the job.

Q In Sulzer engine: during engine running 3 position valve leaking, what are its indications, how will you rectify it; which all places the air is lead to from this valve

Ans– 3 Position valve is reversing shuttle valve which is operated by air by 30bar and allows crosshead lube oil pressure to pass through reversing servomotor so that the required direction of rotation can be set. Reversing shuttle valve is like a spool valve having 3 ports (1-ahead, 1-astern, 1-confirmation that reversing servomotor has reached end position. About leakage spool valve have O-rings which seal the different ports so if leakage change them with O-rings provided in the repair kit. INDICATION of this valve to be faulty is that maneuvering can’t be done from the local maneuvering panel.

If you go through the maneuvering diagram of B&W and Sulzer engines you will come to know that B&W uses 7 bar air for control purposes which are:

Only 30bar pressure air in conjunction with lube oil pressure is used for setting the direction of rotation.

Important to know both engine builder use 30 bar pilot air to operate their starting air valve.    Reason is force = pressure*area so if we reduce the pr to say 7 bars then area has to be increased by almost 4 times to obtain the same force implication. If we use pilot air. So at 30 bar air staring valve becomes compact.

Ans– The mean piston speed is the average speed of the piston in a reciprocating engine. It is a function of stroke and RPM. Mean piston speed most imp significance: heat of compression required for fuel ignition. That is why dead slow is possible. The upper limit of piston speed is limited by materials, friction and power loss, relative time availability for scavenging.

For the pump station- 2 pumps, Heater, Filters, Suction Tank and Pressure/Temperature sensor. One pump is for Stand-by