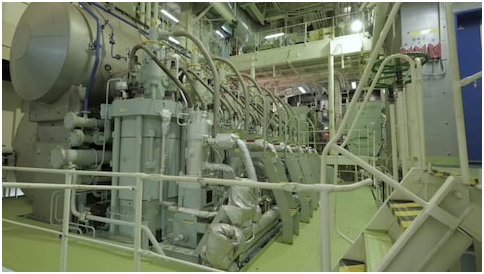 Q What Is Glazing?

Ans– Glazing describes oil burned and baked onto a surface. Glaze is insulative, very hard, polishes to a high shine, wears piston rings, and can be removed only with an abrasive material or a cylinder hone. A glazing is the result of surplus cylinder lube oil being left behind by the piston rings because they have not been “pushed hard enough” against the cylinder bore surface to remove most of the oil. When excess oil is left behind it is burned onto the bore surface and forms a very hard glazed smooth finish.  Light or under load running will always result in a glazed bore. The time taken to glaze a bore will vary according to the lubricating oil used, the load applied, the length of time run under light load, and local air temperature. Any engine with a glazed cylinder bore will always use lots of oil and will cause complete engine failure if not quickly and correctly repaired.

Q What is Scuffing?

Ans-Piston ring scuffing is consists of local micro welding, or material adhesion, between a piston ring and a cylinder liner. Various causes of Scuffing are following

1. Lack of Lubrication- If the engine doesn’t have enough oil, the cylinders will not be properly lubricated. As the ring rubs against the liner of the cylinder, dry spots will cause it to scuff. Symptoms of scuffed piston rings include dirty exhaust and excessive oil consumption.

2. Engine Dry Starts- If an engine has sat idle for even a short time, it may have a “dry start” when next used. This occurs because the existing lubricant sheen in the engine has dried up, and these dry parts of the engine run without lubricant in the first few seconds after the engine starts before lubricant is fully circulated. If an engine is dry-started after a new piston ring is installed, scuffing could result. To avoid this, lubricate the ring before installing it or add a secondary engine oiler that squirts oil into the engine before start-up.

3. Liner Surface Glaze- Engine cylinders that are overheated by insufficient lubrication can break down the little bit of oil that is present, which then accumulates as a glaze on the interior of the cylinder. This glaze can scuff the edges of a piston ring as it scrapes by, as the glaze won’t allow oil to flow properly in the cylinder. Getting rid of this may require a professional reconditioning of the cylinder.

4. Liner Roundness Faults- If the liner of a cylinder is uneven, some points will rub against the piston ring and cause it to scuff. Here, too, a reconditioning of the cylinder may be necessary.

Q what certificate does boiler survey come under?

Q What are the safeties of Steering Gear?

Q What are the safeties of electric winch/windlass?

Q What are the safeties of hydraulic winch?

Relief valve- Fitted after every stage to release excess pressure developed inside it. The setting of the lifting pressure increases after the every ascending stage.

Bursting disc-A bursting disc is a copper disc provided at the air side of the compressor. It is a safety disc which bursts when the pressure exceeds over the pre-determined value.

Fusible plug-Usually located on the discharge side of the compressor, it fuses if the air temperature is higher than the operational temperature. The fusible plug is made up of the material which melts at higher temperature.

Lube Oil low pressure alarm & trip-If the lube oil pressure goes lower than the normal, then alarm is sounded followed by a cut out trip signal to avoid damage to the bearings & crank shaft.

Water high temperature trip- If the intercoolers are choked or the flow of the water is less, then the air compressor will get over heated. To avoid this situation high water temperature trip is activated which cut offs the compressor.

Motor Overload trip- If the current taken by the motor during running or starting is very high then there is a possibility of damage to the motor. An overload trip is thus installed to avoid such situations.

Q What are the engine room crane safeties?

Q What are the checks carried out after Over speed trip?

Q. What is compression ratio?

Ans– The compression ratio can be defined as the value obtained by dividing the total cylinder volume by the clearance volume.

Marine engines with smaller cylinders will have higher compression ratio.

Ans- One screw pumps are referred to as Progressive Cavity Pumps, sometimes called PC Pumps or Worm Pumps. These are generally not considered in the Screw Pump family because the rotor used in these pumps is not shaped like a typical screw, but rather a twisted round shaft. A Progressive Cavity Pump has one shaft that is slightly twisted in the shape of a screw, and is housed in a pumping chamber that is usually rubber lined.

Q. Show the reason for the staying of any flat surfaces in a pressure vessel. How can the use of stays be avoided?

Ans- When a force is applied to a curved plate as shown in Fig. 1, internal forces are set up which enable the plate to withstand the force without undue distortion.

The bursting stress can be resolved into perpendicular components, one of which will oppose the force. The surface will bend until this component balances the pressure. It will then be found that the surface is in the form of an are of a circle. When the pressure acts upon a flat plate, it will tend to bend the plate until equilibrium is obtained. Thus to prevent undue distortion the flat plate must be very thick or supported by some form of stay. It follows that if the use of flat surfaces can be avoided in the design of a pressure vessel there will be no need to fit internal stays. Thus pressure vessels are often given hemispherical ends but, if this is not possible, any flat surfaces must be stayed or of sufficient thickness to resist the pressure without undue distortion.

Q. Why generator Connecting rod have I OR H SECTION?

Ans- The connecting rod in a medium speed 4 stroke engine is subject to an inertia whip loading due to the mass of the con rod swinging about the piston pin. (Because of the lower speed of a 2 stroke engine, the whip loading is not large enough to influence the design of the con rod) Added to this, the inertia loads due to the mass of the reciprocating parts cause a stress reversal from high compressive stress (during power and compression stroke) to a low tensile stress between the exhaust and inlet strokes.

This loading of the rod influences its design, and to withstand the loading described above,  connecting rods are often forged from a manganese molybdenum steel in an I or H section which reduces its mass from one made of round section steel (and thus reduces the whip loading) while maintaining strength.

Admiralty brass is a version of Brass that contains 70% copper, 29% zinc and 1% tin. Admiralty Brass has good corrosion resistance and is specially used for fresh, salt or brackish water application. They are usually used as condenser tubes, Evaporator and Heat Exchanger tubes, Distiller tubing in oil refineries, heater equipment as well as other industrial processes.

Ans- Boiler turndown is a ratio of capacity at full fire to its lowest firing point before shut-down. Old boilers may have only two firing positions, low and high. Newer boilers fire over a wider range of capacities. Depending on the controls, there may be fixed setting points or fully variable settings. If a 1 million BTU boiler can fire as low as 100,000 BTUs, then it has a 10:1 turndown ratio.

Q. What is Critical Speed Range (or Barred range)

Ans- Generator bottom end bearing clearance can be taken using a lead wire as it is not possible to put feeler gauge due to crank throw.