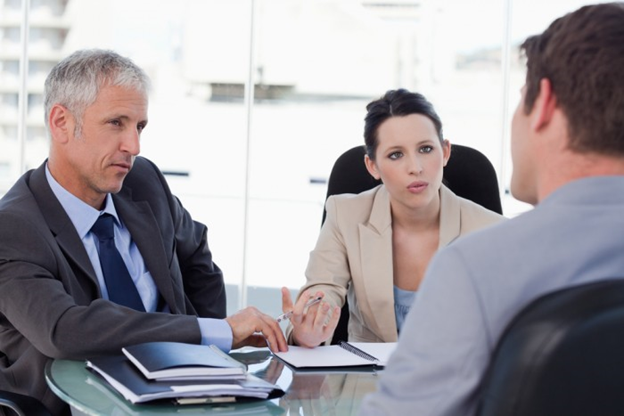 2. Round mid section changes to a rectangular palm section at the bearing ends by means of the elliptical fillet shape

3. A round section is cheaper to manufacture

5. Only compressive forces are acting on 2 stroke connecting rod

6. Connecting rod connects to the piston rod through the cross head pin.

1. Only the big end bearing are of split type.

2. Oblique cut is provided in the crank pin side so that it can be taken out easily with the piston from the cylinder head side because in previous design it was not possible to take out the connecting rod directly from the upward side because it width is more that was the reason we provide oblique cut

3. The top end bearing may be of bush type bearing.

4. It is subjected to high compressive and low tensile stresses of bending as well as axial type.

5. It connects the crank pin directly to the piston gudgeon pin.

Note – Surveyor mostly ask that why serration is been given in the bottom end of connecting rod in 4 stroke engine, the reason to give serration at that place so that they can take the shear stress because function of cut and bolt is to join the two surface not to take the stress so that could be taken care by serration.

Q- What all things to check in connecting rod at the time of unit overhaul?

1. Check the ovality of big end bearing, for that you need to remove the pin and tighten the nut and belt at required torque by the hydraulic jack and check the ovality after that.

At initial boundary lubrication is there because of no motion it means there will be the no oil between the shaft/pin and bearing means metal to metal contact.

But when the engine attains the minimum rpm then oil come in between the pin and bearing so that shaft lifts up and no more metal to metal contact that was the hydrodynamic lubrication.

But now the question is what is elasto hydrodynamic, as we know that when load comes the thickness of the oil film reduces between the shaft and the bearing which normally happen during the expansion stroke when gases try to push the piston downwards and thickness of the oil film again increases when load goes out which normally happen during the scavenging process so the thickness of oil film keep on increasing and decreasing this phenomenon is called elasto hydrodynamic.

Example: the cross head pin bearing or gudgeon pin bearing in two stroke engines employs this hydrostatic lubrication mechanism. In the cross head bearing, the load is very high & the motion is not continuous as the bearing oscillation is fairly short. Thus hydrodynamic lubrication cannot be achieved. Under such conditions, hydrostatic lubrication offers the advantage. The oil is supplied under pressure at the bottom of the bearing. The lube oil pump pressure is related to the load, bearing clearance, & thickness of the oil film required, but is usually in the order of 35-140 kg/cm2

Note – When shaft & bearing don’t touch each other, then what is the reason of making

Mostly we make the bearing of white metal which is the mixture of tin, antimony and copper.

It should have high resistance to fatigue stress.

But now a days we compact the engine so much so the small bearing has to take the max load for that reason we now make the bearing of tin and aluminium.

So the above relation indicate that higher the rpm of the engine, higher will be the thickness of the oil film and ultimately increase the load carrying capacity of the bearing.

1. When shaft touch the bearing that term is called as wiping out

2. As we know that viscosity is directly proportional to the thickness of oil film but if viscosity is too high then it won’t be able to cool the parts and oil has to perform two

functions that is cooling and lubrication, so we need to maintain a balance between all the terminology

3. Minimum bearing clearance has to be there and minimum clearance is required so that some space has been there for the oil film to form in between shaft and bearing, so ultimately the conclusion is that too high is not too good or even too low is not too good

5. So that was the reason why we are using thin shell tin metal bearing now a days which have number of coating on the surface which is shown in the diagram below –

Q-What do you understand by the term embeddability of the bearing?

For crosshead bearing clearance we put the gauge at the top because bottom shell is loaded.

For crank pin bearing clearance we put the gauge on the bottom because top shell is loaded.

For main bearing clearance we put the gauge on the top because bottom shell is loaded.

Q-Why it is difficult to lubricate crosshead bearing in two stroke engine?

start moving upward so at that time it try to compress the air so again load will be on the bottom half of the bearing shell.

But the question arises that how man b&w engine can easily cope up with 2.5-4 bar pressure and lubricate the crosshead bearing so the reason for this is given below –

2. In man b&w crosshead bearing oil groove will be there in both the direction that was in the circumferential as well as in the axial direction

Note – Because if axial groove was not there then it is very difficult for the oil to go in between the bearing and the pin because very little rotation is there in between of these two (pin and bearing).

So these all are the reason that how man b&w can easily cope up with low oil pressure.

Ans – If any bearing wear down then shoe will come down and get to know out from the proximity switch.

1. The oil is mixed with water (viscosity low)

2. Overloading of the engine so oil film will break down

3. Ovality in the pin or may be in the genera!

1. Due to fluctuation of load on the bearing

3. If your material is of poor quality then it will crack

1. Water present in the lube oil

Note- Black spot on the bearing is because of Erosion and layer of tin is oxidised because of corrosion.

This is mostly occur when sea water enters into the lube oil.

Q-Complete procedure to remove the main bearing of the engine?

Ans – Moreover, the main bearing of a ship’s main engine must be overhauled when its running hours as stated by the engine maker have been completed. Apart from this, if there is any sign of bearing worn out or if the bearing temperature is going high, it is imperative to open the main bearing for inspection.

The procedure for opening of main bearing is as follows:

2) Take immobilization certificate from the port state Authority stating that the main engine will not be available for a certain period of time.

3) Read the manual & have a toll box meeting with everyone involved in the job. Discuss the procedure.

4) Prepare important tools & spares to be used in operation.

5) Prepare risk assessment with the personnel involved in the operation.

7) Open indicator cocks of all the units.

14) Make sure that the main bearing measuring tool (depth gauge) is calibrate and set to 0.

16) Compare this reading with the earlier reading in the record or the new bearing reading.

18) Turn the crank throw so that it is towards the exhaust side.

21) Note the marking on the main bearing keep before lifting for correct direction of the keep.

22) Guide the keep safely outside with a help of another chain block and place it on a wooden base once it is out.

23) Mount the tool for lifting the upper bearing shell and place it safely outside.

24) Place the strong back (cross piece) support on the bed plate so that its ends rest on the cross girders.

25) Mount the hydraulic jack on the cross piece placing it such that it lies beneath the crank webs.

26) Mount a dial gauge on the adjacent main bearing so that the lift of the crankshaft can be recorded.

27) Now with hydraulic pressure (1500-1650 bar) lift the crankshaft corresponding to the main bearing clearance to the adjacent main bearing, & check the lift with the help of a dial gauge.

28) Remove the lock screws from the lower shell.

29) Place the dismantling tool on the lower bearing shell such that the flap enters the oil groove.

30) Pull the bearing shell round and up so that it lies on the journal & take it out safely.

Note- Top Main bearing clearance: max-0.58mm, min-0.40mm. At the time of jacking make sure you will jack very carefully and never cross the reading because excess jacking permanently damage your crankshaft (one of the severe damage).