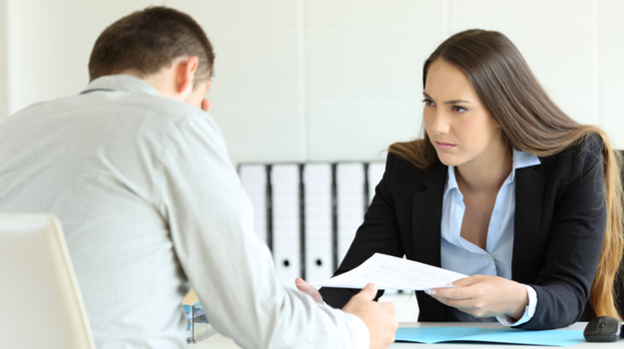 Ans – A very important point to note that valve seat & valve spindle are grind at different angle so that we will get the perfect sealing.

In the diagram below you can see what you have to check. You can use the dial gauge to measure the clearance.

Checking with the help of template, you can check whether clearances are in the right limit or not. Before putting the template, it is wise to remove any type of carbon being deposited on the seat.

Small dents, that cannot hamper the sealing of seat, should be avoided for any repair. But yes, if there are tends & erosion, that are damaging the sealing between the exhaust valve spindle & the seat, then some grinding is necessary.

Manufacturer of the engine provides the standard template for the measuring the clearance of the spindle face. If it is not satisfactory, you can grind it.

Secondly, with the help of temple, you can also, check amount of burn off on valve face.

Sometime, you need to grind the face, to remove the black carbon depositing on it, so that you can get the actual surface to measure on.

You also need to check the trueness of the spindle shalt. This can be done by putting the one end of the shaft on rolling point and on the other end you can fit the dial gauge. Any difference will tell, whether shaft is true or not.

After doing all the checks & putting necessary spares, it is time to box back the exhaust valve. This exhaust valve overhaul was for the MAN B&W engine. So for other engines, things might vary.

Q-What are the different types of crankshaft ?

2. It should have ductility

3. It should have torsional stresses due to hogging and sagging

4. As we increase the carbon content hardness of the crankshaft increases & ductility decreases

Fully forged – Grain of the crankshaft should be align with the centre line s & because of this it can wear more fatigue stresses because it is fully forced crankshaft.

But the only disadvantage in this crankshaft is it cannot be built for large engine, it is only limited upto the generator engine.

1. No slip – because of single forging

2. High strength because we pour it, so its density will be higher and it is very rigid (this was one of the reason why it is not suitable for main engine)

Fully built up – In this web, journal & crank pin all these are fabricated separately, after

that web is heated upto 700 degree Celsius in a furnace, so because of this size of the role in web is increased & then we will insert the journal & crankpin.

Note – Previously we are using the concept of key as shown in the diagram but because of this all the stresses are concentrated at one point only so that was the reason it was no longer in use now.

Semi built up – In semi built up crankpin & web are single piece and journal is connected to the web with the help of shrinkage fit, so because of this we can increase the stroke of the engine as shown in the diagram.

Welded type – Welded type of crankshaft is hollow, so because of this it is heated very easily during the normal running of the engine and cracked out easily. So that was the reason it won’t be used anymore.

Q-What do you understand by the term swelling of journal ?

Ans – This question is generally asked by the surveyor if they ask the question related to the crankshaft, we have to add the fillet to reduce the stress concentration at a particular point, so the point where we add the fillet at that point we cannot put the main bearing so because of this the size of the crankshaft increases which is called swelling of the journal

1. If alignment is not proper – fatigue stresses will increased

Q-How to know the TDC of the unit, if no marking was there on the flywheel (VI)

2. Now make one more marking on the stationary point (straight) with respect to the previous marking

3. Now at the same time mark one point (A Start Point) on the flywheel of the circle

5. Now you have two mark or point, the centre of between these two mark let say TDC is the TDC of that unit.

Q-What is Crankshaft deflection and why to measure it ?

Ans – The Need to Measure Deflection-

If you remember about the construction of the crankshaft, you will recall that apart from other parts, it comprises of the crank-webs, crank-pins & journals along its length. The weight of the crankshaft is supported by the main bearings at the journals. Over a period of time as the engine keeps running, the wear in the bearings may not be uniform across the entire length of the crankshaft. This means that the crankshaft will not remain in the initial straight line but will get bent either upward or downwards to a slight degree which may not be visible with the naked eye but could be sufficient to cause dangerous levels of fatigue in the crank-webs. Hence there is the need of measuring crankshaft deflections at regular intervals to assure that the alignment of the shaft is within permitted limits & these deflections can be measured as described in the next section.

How to take Crankshaft deflections-

Apart from using the same point on the crank-web for measuring deflection there are other factors which need to be kept in mind & these include load on the ship, trim, hog, sag etc. Ideally the deflection needs to be taken at four points of the crank namely top, bottom & the two sides. In actual practice however the bottom reading is not taken due to chances of fouling by the connecting rod & instead reading is taken on both sides of the bottom position, thereby in total 5 readings are taken from each crank-web.

Q- How to record and interpret crankshaft deflection ?

Ans – Having taken crankshaft deflections the practical work might be finished, but a theoretical analysis & interpretation of those results is certainly required to take any meaningful decisions concerning the main bearings based on the recorded data.

We learnt the need & method of taking crankshaft deflections in our previous article. But taking the readings is one thing & it is equally important to properly record, analyze & interpret those readings. This is exactly we are going to learn in this article in the following sections.

The results are tabulated in a manner shown in the example table shown below which shows the readings taken from a real engine. You will note that the numbers in the first row represent the unit or cylinder number & the first column shows the position at which those readings are taken. The final row shows the difference between top & bottom readings which gives the vertical misalignment of the shaft. The values of the vertical misalignment required to be compared to the maximum permissible limits specified by the manufacturer of the engine.

A majority of the people find that the graphical representation of data is more appealing and easily understood, rather than a list of numbers hence we will see how we can use the above data to plot the deflection curve. Take a look at the deflection curve diagram first so that you can correlate to what you read next.

1. As you can see above on the top is the crankshaft which shows the 7 units and the vertical misalignments written on top of each unit (these values are taken from the last row of the table above).

2. A straight line is drawn beneath the crankshaft and the center lines from each unit are drawn downwards through this line. This now acts as our basic infrastructure upon which to start plotting the deflection curve.

3. Since the first deflection is +1.0 units (remember they are normally mm unless otherwise specified), we plot this distance downwards from the reference line on the center line of unit 2 (not unit 1) and make the line ab which is at an angle proportional to the deflection at a. This line is further extended to intersect the center line of the next unit.

4. The next step is to measure the deflection from this point of intersection (downwards for negative value and upwards for positive value) and join the point from the previous point, in this case which gives rise to the line bc.

5. This step is repeated till the last unit

A smooth curve is drawn between these points and the position of this curve with respect to the base line XY gives an idea about the state of various bearing. For example in this particular case you can easily make out that bearing of units 1 and 2 are too far away from the baseline and hence need attention.

You must have realized by now that why only comparing the values of vertical misalignment against the manufacturer’s specifications is not sufficient? This is so because even if the values are within limits, the relative wear and tear might be sufficient to cause too much misalignment hence this is a method to be double sure about the crankshaft being aligned properly.