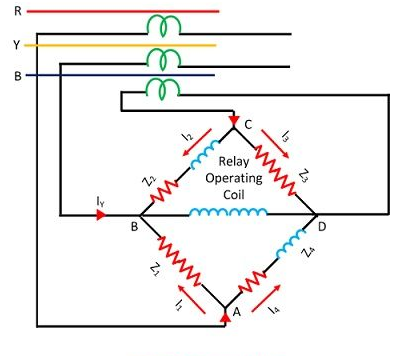 Under the balanced condition, the generator gives equal currents in all the 3-phase either star connected or delta connected loads. Here the vector sum of the negative sequence current is 0, hence net unbalance current is 0 here, The unbalance may occur due to the circuit breaker operation, circuit breaker failures or system faults. Hence the negative sequence current starts flowing through the stator winding, which creates additional flux in the air gap which rotates in the opposite direction to that of the rotor synchronous speed. This flux induces currents in the rotor body, retaining rings at twice the line frequency. Due to this, the rotor body temperature starts increasing. But if the magnitude of these negative sequence current is high, then this opposite direction potentially affects the normal operating direction of turbine. It leads to significant damage to the generator set.

Figure shows the scheme used for the negative phase sequence relay. A network consisting of 4 impedances Z1, Z2, Z3 & Z4 of equal magnitude connected in a bridge formation is energized from three CTs. A single pole relay having an inverse-time characteristic is connected across the circuit, as shown in the figure. Z1 & Z3 are non- inductive resistors while Z2 & Z4 are composed of both resistance & inductance. The values of Z2 & Z4 are so regulated that currents flowing through them lag behind those in impedances Z3 & Z1 by 60°. The relay is assumed to have negligible impedance. The current from phase R at junction A is equally divided into two branches as I1 & I4 but I4 will lag behind I1 by 60°.

Similarly the current from phase B divide at junction C into two equal components I3 and I2; I2 lagging behind I3 by 60°.

The current through relay operating coil at junction B will be equal to pharos sum of I1, I2 and IY.

Fig. represents the pharos diagram when the load is balanced or when there is no negative sequence current. Since the current through the relay is I1 + I2 + IY = 0 because I1 + I2 = – IY

So the relay remains inoperative for the balanced system.