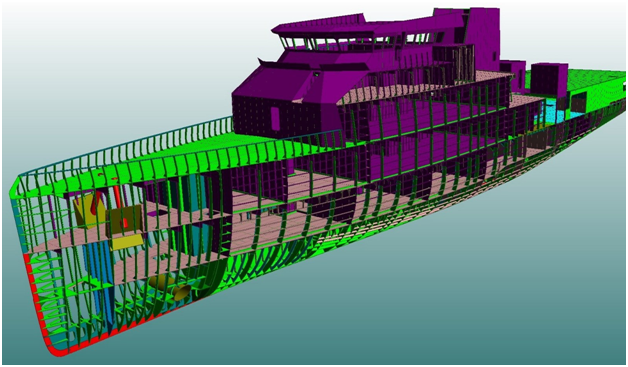 Q Explain how the period of the roll varies with

a) The amplitude of roll

b) The radius of gyration

d) The location of masses in the ship

Q With respect to trim & stability, describe the following:

a) Effects on  the centre of the gravity of slack tanks.

b) Effect on stability of ice formation on the superstructure.

c) Effects of wind and waves on ship’s stability.

d) Effect of water absorption by deck cargo & retention of water on deck.

a) Describe the problem of free surface effect.

b) Explain how it is intended that water should be cleared from car or cargo decks.

c) Describe possible methods for improving the stability & survivability of these vessels.

Q Describe the general precautions to be taken against capsizing. State the recommended criteria for passenger & cargo ships.

Q Explain what is meant by  the dynamical stability.

Q The value of the maximum righting arm is dependent upon the position of the centre of buoyancy and the:

a) Longitudinal centre of gravity

b) Transverse centre of gravity

d) Vertical location of the centre of gravity

Deduce the relation of the option you have selected with reference to the value of maximum righting arm.

Q A ballast tank is one-third full when additional ballast is added until it is two-thirds full. The increased amount of liquid in the tank will have the greatest influence on

c) Virtual rise in the centre of gravity

Give detailed explanations stating why the other options were not considered.

Q Describe the effect on GM of rolling and how bilge keels, anti-rolling tanks and stabilizer fins reduce the amplitude of rolling.

Q Describe the effect of the following on the ship’s stability,

a) Ice formation on superstructure

b) Effect of wind and waves

c) Changes that takes place during the ships voyage

d) Bilging of a compartment

e) While water is being pumped out from the dry dock

a) State reasons for freeboard requirements.

b) i. Explain the term conditions of assignment.

ii. List the items that may be examined during a Load Line survey after a vessel’s major repair in the drydock.

Q With reference to the prevention of hull corrosion discusses:

a) Surface preparation & painting of  the new ship plates.

b) Design of the ships structure & its maintenance.

c) Cathodic protection by sacrificial anodes, of the internal & external areas of the ship.

Q a) Describe the safety precautions which are taken when using paints.

b) Describe the use of self-polishing anti-fouling paint, and the proposed banning of tributyltin (TBT)

Q Describe the in-water survey to classification society requirements of the external underwater structure of a very large crude carrier.

Q Describe the preparation necessary before the application (in dry dock) of sophisticated or approved long life coating to the underwater surface of the hull.

a) State the significance of the roughness profile.

b) List the different sophisticated coatings which are available.

Q a) Explain in detail, how an underwater survey is carried out

b) State the requirements to be fulfilled before an underwater survey is acceptable to the survey authority.

c) Construct a list of items in order of the importance that the underwater survey authority should include.

Q With reference to membrane tanks for the carriage of liquefied gas at very low temperatures:

a) Describe with the sketch one method of building up the insulation;

b) State which alloy is used for the membrane & the reason;

c) Explain why a secondary barrier is installed.

Q With regard to the carriage of crude oil and its associated products:

a) i. Sketch and describe the operation of an explosimeter suitable for testing pump rooms or tanks.

ii. State why false readings are likely to be given by the explosimeter.

b) State the publication that gives guidance on safety.

c) Define the terms lower and upper flammable limits illustrating your answer by means of a rough sketch of a hydrocarbon vapour oxygen graph.

b) Explain how the boil off from liquefied natural gas is handled.

Q a) Explain the considerations which govern the size & shape of a rudder.

b) Explain why the rudder angle does not normally exceed 35°.

c) What factors influence the frictional resistance of a ship and what formula is used to calculate their resistance?

d) A ship of 12000 tonne displacement has a rudder 15 m² in area, whose centre is 5 m below the waterline. The metacentric height of the ship is 0.3 m and the centre of buoyancy is 3.3 m below the waterline. When travelling at 20 knots the rudder is turned through 30°. Find the initial angle of the heel if the force Fn perpendicular to the plane of the rudder is given by:

Allow 20% for the race effect.

Q a) Why is it important in a tender ship to keep the double bottom tanks pressed up?

i. Calculate the corresponding speed and wetted surface area of as similar ship of 2000 tonne displacement.

Q a) Explain how to distinguish between list and loll and describe how to return the ship to the upright in each case.

b) Describe briefly the significance of the factor of subdivision.

c) A ship 120m long has a light displacement of 4000 tonne and LCG in this condition 2.5m aft of the midships.

The following items are then added:

Q a) Describe the general precautions to be taken against capsizing.

b) Explain what is meant by torsional stress.

ii. Distance of the centre of flotation from the midships

iii. Second moment of area of the water plane about a transverse axis through the centre of flotation.

Q a) Describe the effect of cavitation on the propeller blades.

Calculate the speed of advance, thrust and thrust power.

Q a) Describe the stability requirements of a ship for dry-docking.

Calculate the final draughts when a mass of 180 tonne lying 40 m aft of the midships is removed from the ship.

Q a) Describe how water tightness is maintained where bulkheads are pierced by longitudinal beams or pipes.

b) A triangular bulkhead is 7 m wide at the top and has a vertical depth of 8 m. Calculate the load on the bulkhead and the position of centre of pressure if the bulkhead is flooded with sea water on only side:

i To the top edge

ii With 4 m head to the top edge

Q a) Describe how the distribution of mass within the ship affects the rolling period.

b) Describe the general precaution to be taken against capsizing.

Q a) List the main factors which affect the rolling period of a vessel.

b) A box-shaped vessel is 20 m long and 10 m wide. The weight of the vessel is uniformly distributed throughout the length and the draught is 2.5 m. The vessel contains ten evenly spaced double bottom tanks, each having a depth of 1m.

Which ballast condition is to be preferred from the point of view of strength?

Q a) Describe the procedure for speed, power and fuel consumption trials.

b) List the variables which affect the force on a rudder.

Q a) What is the effect on fuel consumption per unit time, if the ship’s speed is outside its operating range?

Q a) Explain how the distribution of masses affects rolling and pitching.

b) Describe the effect of GM on rolling.

Q a) List the precautions necessary before an inclining experiment is carried out.

b) Describe briefly the significance of the factor of safety.

c) A box shaped vessel, 50 metres long X 10 metres wide, floats in salt water on an even keel at a draft of 4 metres. A centre line longitudinal watertight bulkhead extends from end to end and for the full depth of the vessel. A compartment amidships on the starboard side is 15 metres long and contains cargo with permeability 30%. Calculate the list if this compartment is bilged. KG = metres.

Q a) Explain the purpose of the rudder carrier and pintles.

Q a) Explain the term angle of loll and state what, if any, dangers it poses to a vessel.

b) Describe the factors to consider in order to determine whether a list is due to a negative GM or to uneven distribution of masses in a ship.

Calculate the new draughts after the following masses have been added

Q A box barge of 45 m long and 15 m wide floats at a level keel draught of 2 m in sea water, the load being uniformly distributed over the full length. Two masses, each of 30 tonne, are loaded at 10 m from each end & 50 tonne is evenly distributed between them. Sketch shear force diagram & give the maximum shear force.

Q a) Explain what is meant by permissible length of compartments in passenger ships.

b) Describe how the position of the bulkheads is determined.

c) Describe briefly the significance of the factor of subdivision.

d) A box shaped vessel 65m X 12m X 8m has KG 4 m and is floating in salt water upright on an even keel at 4 m draft F and A. Calculate the moments of the statically stability at (a), 5 degrees and (b) 25 degrees heel.

Q a) Explain what is meant by ‘assigned summer free board’.

Q a) Describe the relationship between frictional resistance and:

iv. The length of the vessel.

Calculate the total resistance and the wake friction.

Q a) Explain why the GM must remain positive until the critical instant at which the ship takes the blocks overall.

b) What is “form stability” and “weight stability”.

b) A ship of 5000 tonnes displacement enters a drydock trimmed 0.45 m by the stern. KM=7.5m, KG=6.0 m. MCTC=120 tonnes-m. The centre of flotation is 60 m from aft. Find the effective metacentric height at the critical instant before the ship takes the blocks overall, assuming that the transverse metacenter rises 0.075 m.

Q a) Distinguish between ships of Type “A” & Type “B” for the purpose of computation of free board.

Calculate the new draughts after the following changes in loading have taken place.