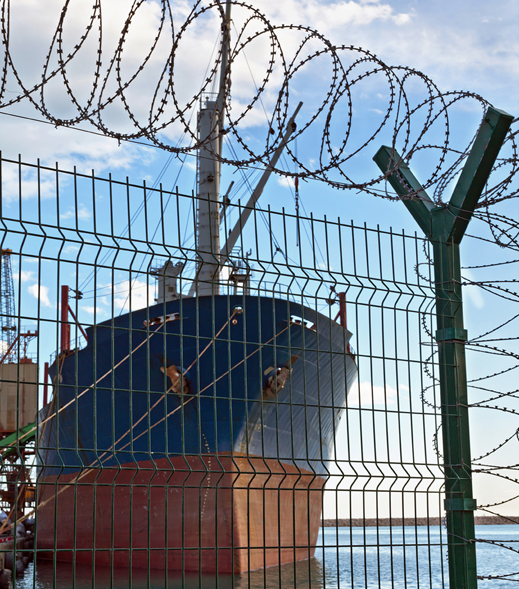 ISPS is the amendment of SOLAS Convention on minimum security arrangements for ships, ports and government agencies. Having came into force in 2004. It was developed in response to the threats to ships and port facilities after the 9/11 attacks.

Enforced on 1st July 2004, the International Ship & Port Facility Security Code has since formed the basis for a complete mandatory security management for the international shipping.

The Code is divided into two sections, Part A & Part B.

Obligatory Part A outlines details about ship & port security related requirements which SOLAS contracting governments, port authorities & shipping companies must cohere to, in order to be in accordance with the Code.

Part B of the Code provides a series of recommendatory guidelines on how to meet the requirements and obligations set out within the provisions of Part A.

The main objectives of the ISPS Code include:

IMO is capable to give support to Member states in need of assistance in implementing the Code, by way of national & regional workshops, seminars, needs assessment missions, etc.

Applicable to the Vessels:

The ISPS Code applicable on ships which are on the international voyages (including passenger ships, cargo ships of 500 GT & upwards, & mobile offshore drilling units) & the port facilities serving such ships. The Code doesn’t apply on the warships, naval auxiliaries or other ships owned or operated by the contracting government & used only on government non-commercial service.

The Regulation XI-2/8 organizes the primary role of the Sea Master, which authorizes him to maintain order & conduct decisions for the sake of the personnel & security of the ship.

Regulations XI-2/8 states that the Sea Master must not by challenged or withheld from completing his duties.

The Code is a two-part document describing minimum requirements for security of ships & ports. Part A provides mandatory requirements. Part B provides guidance for implementation. Some contracting governments have selected to also treat Part B as mandatory.

There are 19 chapters in ISPS

s. Verification and certification for ships

There are three levels in ISPS:

LEVEL-3 : High level of threat against the specific target. Maintaining further high level of security measures for a limited period of time.

1) Adequate deck & over side lighting.

3) Access on and off the vessel should be control and all person identify.

4) Access to certain area of vessel to be limited with key control.

5) Unused room and spaces should be kept locked.

6) Periodic inspection or patrol should be made a regular interval.

In addition to level -1

1) Occasional search should be carried out at random interval.

2) Access of all visitors to the vessel should be strictly control.

3) Close security to be paid on deliveries & stores.

4) Baggage should not be unattended.

5) Check should make on seal on container and other cargo.

6) No person other than crew member should be allowed on bridge or engine room.

8) All crew should be reminded of bomb alert security of the vessel.

2) Granting access only to those acknowledging to the security incident.

3) Carry out full or partial search of ship.

5) Tighten security patrol of the vessel.

6) Crew members should be briefed on seriousness of the situation.

10) Similar key area which is essential for the safe operation of ship.

How can a second engineer help in the implementation of ISPS on board ships ?

What if we are talking about second engineer’s role in implementation of ISPS when he or she is not ship security officer?

Well then the area of responsibility is narrowed to only engine room but the responsibilities remains the same. Let us discuss few of these.

2. Controlling access inside the key areas such as CO2 room

CO2 can be used as a weapon & second engineer must ensure that the access to it is controlled specially during the port stay. Normally CO2 room is locked with one key in the ECR and other in the CCR.

Other key security area is ship’s stores. Second engineer should supervise receiving of the engine stores. He must check that the stores received are as per the invoice & what was ordered.

On most of the ships, ER or ECR is the designated CITADEL. If so, second engineer must ensure that CITADEL equipments are in place, are working.

Also the ration and water in the citadel is appropriate & as required.

5. Main engine and other machinary ready to deal with any security incident

And finally, the second engineer must ensure that the main engine and other ship’s machinary is maintained in good working order to deal with any security incident.

Auxilary engines and main engine are required to withstand the load of sudden course alterations in case of a pirate attack.

All the equipments must be able to work at their optimum capacity. Maintaining all these machineries contributes towards the ISPS duties of the second engineer.