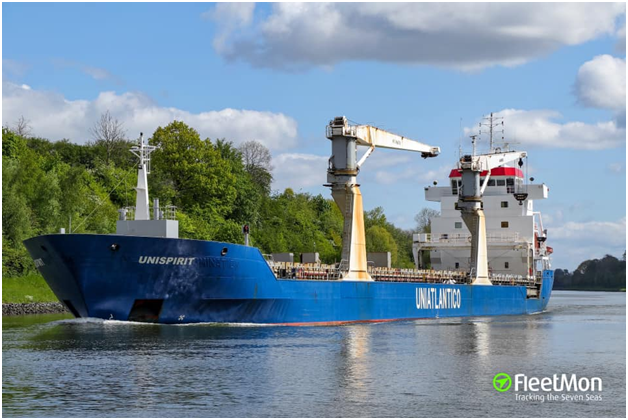 Cargo of bagged millet and corn in cargo hold of unfortunate general cargo ship UNISPIRIT was strenuously searched by unified Spanish police, CG and Customs teams during five consecutive days at Las Palmas, Canry Islands. The ship arrived on Oct 16 from Sao Sebastiao Brazil, understood not for cargo operations, but with the sole purpose of a thorough search, with final destination being Cadiz, Spain. 1,200 kilo of cocaine were found hidden in cargo, loaded in Brazil and destined for Spain. 1,5 tons of this same cocaine were found during loading operation at Sao Sebastiao on Oct 2, in cargo holds among bags. So probably, it’s the same drugs shipment. Understood as with Brazilian incident, no arrests were made among partially Russian (including Captain) crew. UNISPIRIT left Las Palmas late Oct 21, bound for Cadiz.

General cargo ship UNISPIRIT was searched by Brazilian Federal Police on Oct 2 at Sao Sebastiao Port, Brazil, where the ship is presently berthed. 1.5 tons of cocaine were found hidden in big bags with corn, loaded at Sao Sebastiao, and bound for Cadiz, Spain. No crew arrests were made so far, hopefully crew is not implicated. Crew is said to be Russian, but probably, it’s partially Russian, and includes other nationalities.