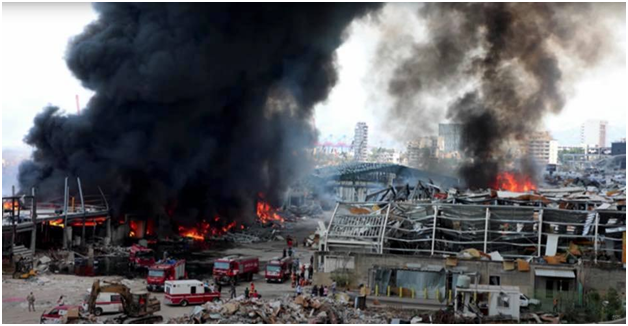 It has been a month since the port of Beirut faced its worst possible man-made disaster since the Lebanese Civil War. But the fear of explosions and fires do not seem to leave the city’s citizens alone.

On Friday, the port of Beirut woke up to another deadly fire that threatens to cut the lifeblood of the Middle-Eastern country: foreign humanitarian aid. The blaze broke out was an aid agency had been storing food and cooking oil.

As per the Red Cross Regional Director Fabrizio Carboni, the warehouse stocked thousands of food parcels, the life-support of the Lebanese economy.

The residents of the vital Middle-Eastern port have now been subjugated to constant traumas of a fire breaking out, partially because of last month’s devastating impact that has scarred most of the residents for life. Many are fleeing the city in an attempt to break free from the trauma. For many, the fire brought back memories of the explosion.

The military police had started an investigation into the blaze, with early investigations indicating repair works in the port setting off the initial blaze. The facility is currently under the control of the Lebanese Army. An Army spokesperson said that the fire has now been put out, with firefighting helicopters and officials coming to the rescue.