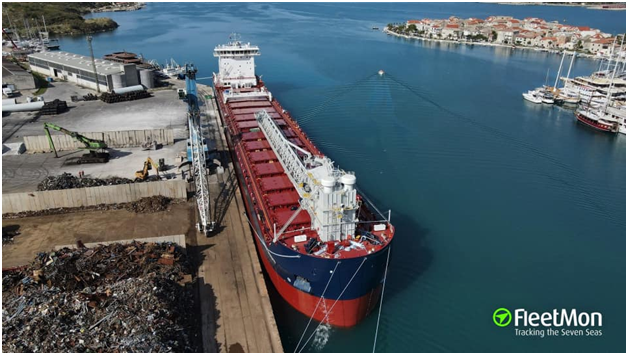 The ship was being built in the 3 Maj Shipyard in Croatia. It is already en route to Canada. The ninth Equinox class vessel will join the Canadian company’s fleet after traveling across the Atlantic to Canada where it is expected to start trading on the Great Lakes by November 2020.

Previously, the sister ship of ALGOMA INTREPID, that is, Croatian-built ALGOMA INNOVATOR, had been crowned as the most efficient river class vessel to arrive in the Great Lakes market in nearly 40 years.

The ship has a host of new features, including a forward-mounted boom like it’s a sister ship that provides greater flexibility when it comes to docks that have low accessibility.

The project, however, was fraught with challenges, especially from the financial sector. Back in 2017, work on ALGOMA INTREPID was halted when the Croatian shipyard entered an extended period of financial difficulties. Algoma took delivery of the ALGOMA INNOVATOR, a sister ship, and the first ship built under a two-vessel contract, near the beginning of the 2018 navigation season. Algoma canceled the contract for the second ship along with the contracts for three Seaway-max self-unloading vessels in 2018 as a result of the financial problems at the Shipyard.

The tables, however, turned with the dawn of 2019’s September. Algoma confirmed again the contract with 3. Maj to acquire one Equinox class self-unloader upon its completion.

Algoma will pay the agreed price of the vessel at delivery, subject to certain penalties for late delivery, including a cancellation right if delivery is delayed beyond an agreed date.

The ultra-modern ship will cost the Canadian company at least $36.5 million.