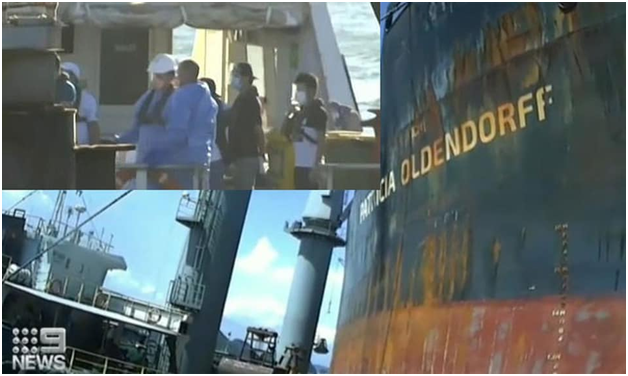 Capesize bulk carrier PATRICIA OLDENDORFF left Gwangyang, Korea, on Aug 30, bound for Hedland Australia, on Sep 4 she entered Manila Bay and anchored, obviously for the purpose of crew change. She left Manila next day and headed for Australia. She anchored at Hedland anchorage on Sep 16, and in Sep 16-18 period, almost all the crew with just two exceptions (soon to be p-tested, too), were positive tested. As of morning Sep 28, 13 crew were already taken ashore and put into quarantine hotel. “They cant leave their rooms, food and other provisions are brought to them as required, a temporary fence has been set up around the hotel to strengthen security measures at the quarantine hotel”. Of the remaining 9 crew, 7 were p-tested, and there are security and rapid response teams on board of hapless bulk carrier. The crew at this stage are either non-symptomatic, or they are (have) very few symptoms – said WA Health minister Roger Cook. Mr Cook warned there is a risk of new outbreak in the state if its not contained, with more cases expected to come from the ship. “If it gets out into the community it will create a disaster, worse than what we’ve seen in Melbourne ,” he said.