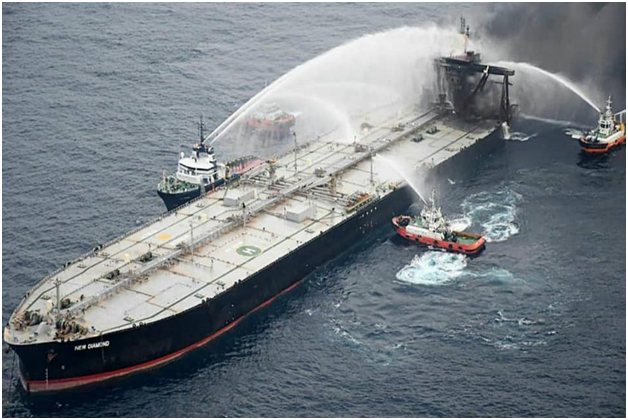 -The captain of the VLCC that caught fire in the Indian Ocean earlier this month will face charges in Sri Lanka.

-There is sufficient evidence to charge the captain under the country’s marine pollution act as well as the penal code for criminal evidence.

-Sri Lanka will also seek $1.88 million in damages from the ship’s owners.

Sri Lanka will seek at least RS340m ($1.9m) from the owner of the stricken VLCC New Diamond for assistance given to the vessel since it caught fire on September 3, the coordinating officer to the country’s attorney general said.

Further bills are likely to be added in the coming weeks.

The Panamanian-flagged ship, which suffered a boiler explosion leading to a major fire, is owned by Adam Polemis’s New Shipping and insured by the West of England P&I Club.

The fully-loaded vessel is still in Sri Lankan waters, although the fire was completely doused last week and authorities insist the cargo tanks are intact.

Sri Lankan authorities have said they will file negligence and pollution charges against the Greek captain of the ship, which leaked bunker fuel off the island’s eastern coastline last week.

“There is sufficient evidence to prosecute the skipper under the marine pollution act as well as the penal code for criminal negligence,” a spokeswoman for Attorney-General Dappula de Livera told reporters in Colombo.

-Authorities and appointed salvors, SMIT Singapore, are still working out a plan to get the 270,000 tonnes of oil on the ship to the Paradip refinery of its customer, Indian Oil Corp.