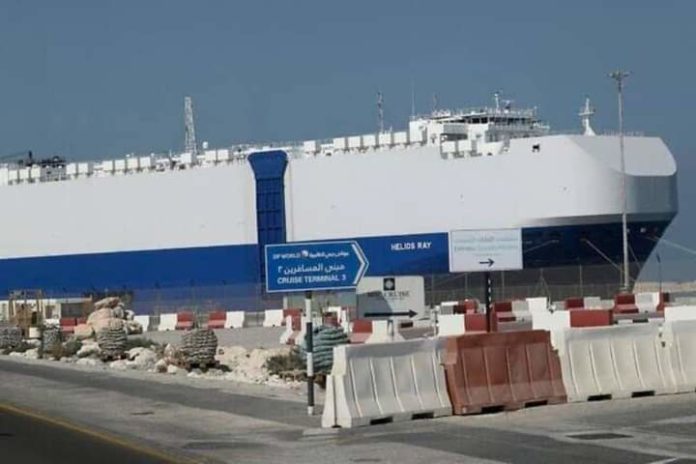 An Israeli-owned cargo ship that suffered a mysterious explosion in the Gulf of Oman came to Dubai’s port for repairs.
The crew was unharmed, yet the vessel sustained two holes on the pole side and two on starboard side.
It remains unclear what caused the blast, but the incident comes amid sharply rising tension between the US and Iran over its unraveling 2015 nuclear deal.
An Israeli cargo ship has been struck by an unexplained explosion while sailing in the Gulf of Oman, reports the Independent.

The vessel arrived at Dubai’s port for repairs, days after the blast revived security concerns about the Middle East’s waterways amid heightened tensions with Iran.

The hulking Israeli-owned MV Helios Ray sat at dry dock facilities at Dubai’s Port Rashid on Sunday. Although the crew was unharmed in the blast, the vessel sustained two holes on its port side and two on its starboard side just above the waterline, according to American defence officials.

It remains unclear what caused the explosion, but the incident comes amid sharply rising tension between the United States and Iran over its unravelling 2015 nuclear deal with world powers.

Iran has sought to pressure President Joe Biden’s administration to give it the sanctions relief it had received under the accord, which former President Donald Trump abandoned.

Emirati officials did not immediately acknowledge or respond to requests for comment on the vessel docking in the country.

Gilad Erdan, Israeli ambassador to the US and United Nations, told Israel’s Army Radio on Sunday “it was no secret that the Iranians are trying to harm Israeli targets,” adding the explosion on the ship bore the hallmarks of other Iranian attacks.

Haaretz newspaper reported that Israeli defence officials flew to Dubai on Saturday to investigate the incident.

The Helios Ray discharged cars at various ports in the Gulf before making its way out of the Middle East towards Singapore. The blast hit as the ship was sailing from the Saudi port Dammam out of the Gulf of Oman, forcing it to turn to Dubai, in the United Arab Emirates, for inspection.

Iranian authorities have not publicly commented on the ship. The country’s hardline Kayhan daily, whose editor-in-chief was appointed by Supreme Leader Ayatollah Ali Khamenei, alleged the Helios Ray was “possibly” on an “espionage” mission in the region, without offering any evidence to support the claim.

The Sunday report speculated the ship may have been “trapped in an ambush by a branch of resistance axis,” referring to Iranian proxies in the region.

ABOUT US
This website strives to keep you updated with Marine Knowledge and give an extra learning edge for all those who are preparing for the Marine Engineering Officer Exams.
Contact us: contact.marinein[email protected]
FOLLOW US
© Copyright 2019, Marine Box Design by Sriyaan technologies