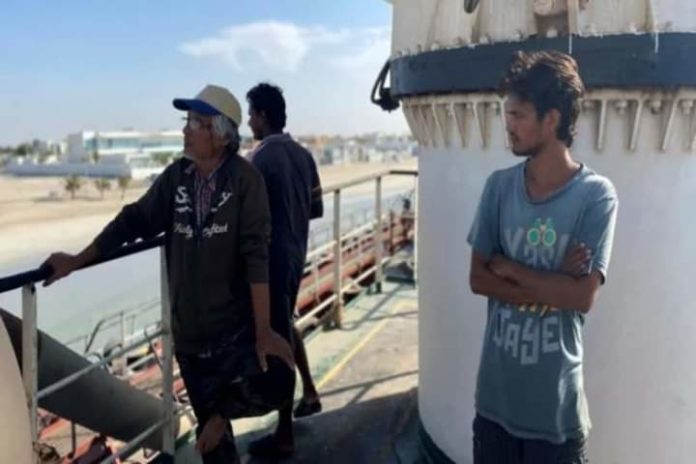 A shipping company from the United Arab Emirates hit financial trouble in 2017.
-It abandoned an oil tanker off the coast of Dubai, it left a small crew still aboard, stranded at sea without pay or a way home.
-Those men have been on the tanker ever since, but a chance at repatriation for the five remaining crew seems to finally be within grasp.

A recent CBC story brings out a painful story of seafarers caught in the jinx of owner’s economic downfall. They have been suffering for more than 3 years in sea without proper facilities and pay.

•What did the owner say?

“The owner told us: ‘Please wait, I want to sell the ship and after I will clear the salaries,’” remembers Nay Win, who came to work as chief engineer on the MT Iba from his home in Myanmar.

Win started work on the tanker in 2017, a few months before the owners, Alco Shipping Services, asked the crew to anchor about eight miles off the Dubai coast.

As the passing months turned into years, Win found himself unable to support his family back in Myanmar.

He told The Current that they were forced to borrow money to survive, and his son and daughter both had to leave university when he couldn’t keep up with the fees.

With Win stranded 4,000 kilometres away, the family faced both a pandemic and — more recently — a political coup.

“Without money, how can they eat … with no money, how do we manage?” he said.

At the end of January, a representative for Alco Shipping Services told local media that a buyer had been secured for the vessel, previously valued at $4 million US, but the process had been hampered by the pandemic.

The sale to Shark Power Marine Services was agreed recently, but the final sum paid for the tanker has not been made public.

Coming ashore for the first time in three and a half years, the crew met with Alco representatives last week, and agreed to accept $165,000 US in unpaid wages, about 70 per cent of what they’re owed.

Win and his crewmates may not have received any money at all if they had left the ship sooner, said Andy Bowerman, regional director for the Middle East and South Asia with The Mission to Seafarers. The charity supports merchant crews around the world.

“The only collateral that they have is the ship itself,” Bowerman said, adding that crews are sometimes persuaded to leave abandoned vessels, then never hear from the owners again.

•No passports with the crews

The crew also didn’t have their passports — Win’s has expired — or the necessary visas to enter the U.A.E, he explained. And due to safety concerns, it is illegal for a crew to abandon a ship in open water.

“They find themselves stuck really, between the devil and the deep blue sea,” he said.

Bowerman said his organization has been supporting the crew through “a pretty grim existence.”

The men had been living in the same clothes for months, washing in cold water or seawater, and relying on his charity for food, he told The Current’s guest host Rosemary Barton.

The organization also wanted “to be physically present, to listen to their stories, bring them news of home, try and ensure that their well-being is looked after as much as possible.”