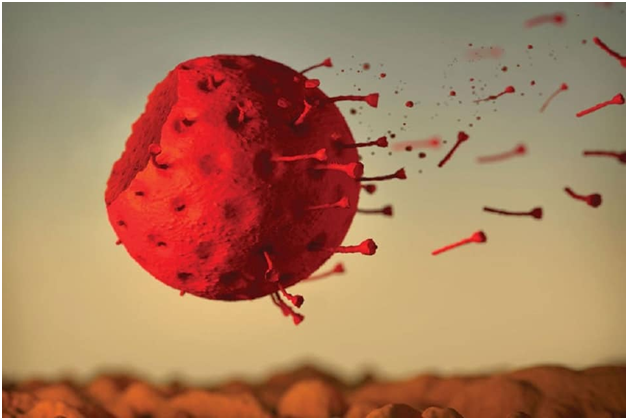 -So, keeping windows open, running the ceiling fans and switching off sensor-based ventilations is the key

In a major development, the Centers for Disease Control and Prevention acknowledged on Monday that people can sometimes become infected with the novel coronavirus through airborne transmission, especially in enclosed spaces with inadequate ventilation, reports the Washington Post.

The long-awaited update to the agency Web page explaining how the virus spreads represents an official acknowledgment of growing evidence that under certain conditions, people farther than six feet apart can become infected by tiny droplets and particles that float in the air for minutes and hours, and that they play a role in the pandemic.

The update follows an embarrassing incident last month when the agency removed a draft that had not gone through proper review and was posted in error. The draft’s wording included a reference to aerosols — tiny droplets that can stay in the air, potentially traveling a significant distance. Officials said the draft was removed because they feared the language could be misinterpreted as suggesting that airborne transmission is the main way the virus spreads.

That is not the case. The CDC says the main way the virus spreads is through close contact with virus-containing droplets — large and small — that are emitted when someone coughs, sneezes, sings, talks or breathes. When people are in proximity, within six feet, they are exposed to the whole spectrum of spray that can cause infection.

“It’s not just big goobers, but everything that’s exhaled, big and tiny,” said one CDC scientist who spoke on the condition of anonymity because he was not authorized to speak on the record.

Now, the CDC is saying infection can also spread through exposure to smaller virus-containing droplets and particles that can remain suspended in the air over long distances and time.

“There is evidence that under certain conditions, people with COVID-19 seem to have infected others who were more than six feet away,” the updated Web page states.

“These transmissions occurred within enclosed spaces that had inadequate ventilation. Sometimes the infected person was breathing heavily, for example while singing or exercising.”

How Does This Happen?

“Under these circumstances,” the Web page says, “scientists believe that the amount of infectious smaller droplet and particles produced by the people with COVID-19 became concentrated enough to spread the virus to other people. The people who were infected were in the same space during the same time or shortly after the person with COVID-19 had left.”

In a statement, the agency said it “continues to believe, based on current science, that people are more likely to become infected the longer and closer they are to a person with COVID-19.”

The CDC added: “Today’s update acknowledges the existence of some published reports showing limited, uncommon circumstances where people with COVID-19 infected others who were more than 6 feet away or shortly after the COVID-19-positive person left an area.”

The agency said transmission took place in “poorly ventilated and enclosed spaces that often involved activities that caused heavier breathing, like singing or exercise. Such environments and activities may contribute to the buildup of virus-carrying particles.”

The agency said its recommendations for avoiding the virus remain the same.

1) People can protect themselves by staying at least six feet away from others, wearing a mask that covers their nose and mouth, washing their hands frequently, cleaning touched surfaces often and staying home when sick, the CDC said.

2) People should also avoid crowded indoor spaces and ensure indoor spaces are properly ventilated by bringing in outdoor air as much as possible, the agency said.

Although many experts have already pointed to mounting evidence that airborne transmission plays a role in spreading the virus, the official acknowledgment from the CDC is certain to add to public health concerns about risks of infection from crowded indoor spaces with poor ventilation.

Both presidential campaigns and the Commission on Presidential Debates say they plan to move ahead with in-person events less than a week after President Trump tested positive for the coronavirus. As more White House personnel announce they have tested positive, it is not clear what protocols have been put in place to reduce the risk of infection for staff members, many of whom don’t wear masks and work in cramped conditions.

What Can You Do To Improve the Air Condition?

-When there is adequate ventilation, respiratory droplets are diluted by outdoor air or pushed out by air exchanges, according to experts.

-Open windows for fresh breezes, they said. And reverse ceiling fan blades, which can draw air up, away from a room’s occupants.

Experts have pointed to the spread of the virus in choirs, buses, fitness classes and other poorly ventilated spaces. In July, more than 200 aerosol biologists and other experts sent a letter expressing concerns about airborne transmission to the World Health Organization, which responded by acknowledging the “emerging evidence” the pathogen can spread through the air.

A group of infectious-disease physicians and aerosol experts, in a letter published Monday in the journal Science, more strongly emphasized the airborne potential of the virus than the CDC did in its update.

How Should You Focus Your Judgement and Thinking?

“The balance of attention must be shifted to protecting against airborne transmission,” they said, because people are “far more likely” to breathe in floating virus than be sprayed by quickly falling droplets of contaminated body fluid.

Aerosols and airborne transmission “are the only way to explain super-spreader events we are seeing,” letter author Kimberly Prather, an atmospheric chemist at the University of California at San Diego, said in an interview. Once the airborne route is acknowledged, she said, this becomes a “fixable” problem through proper ventilation.

“Wear masks at all times indoors when others are present,” Prather said. Separation is important — but, inside, no such thing as a completely “safe social distance” exists.

“There is overwhelming evidence that this is an important route of transmission for covid-19, and we have desperately needed federal guidance on this route,” said Linsey Marr, who studies aerosols at Virginia Tech and was an author of the Science letter.

“I would like to emphasize that short-range airborne transmission when people are in close contact, meaning inhalation of aerosols, probably is more important than transmission by large droplets that are sprayed onto mucous membranes.”

Some of the debate about airborne transmission may stem not from substance but from terms used differently in the fields of aerosol chemistry and infectious disease. The Science letter clarifies that fluid blobs up to 100 microns wide (the thickness of a sheet of paper) can behave as aerosols, unlike some definitions focused on smaller particles.

“Aerosol biologists speak a slightly different language than, say, clinicians like myself do, where we’re looking more at the pragmatic application of transmission for infection control, especially in a health-care environment,” Jay Butler, the CDC’s deputy director for infectious diseases, said last month. He summed up a National Academies of Sciences workshop, convened in late August to discuss the growing evidence of airborne transmission, as having “much more agreement than disagreement” about its possibility.

Airborne But Not As Contagious Like Other Airborne Diseases?

Covid-19 is not as contagious as measles or tuberculosis, which are primarily spread through airborne transmission and require hospitals and health-care settings to care for patients in special negative-pressure infection isolation rooms to prevent spread.

There have been several well-documented cases in which the coronavirus spread rapidly and widely in an enclosed or indoor environment — a restaurant in Guangzhou, China; a bus traveling in China’s Zhejiang province; a call center in Seoul; and a church choir in Washington state.

In that instance, a singer spread the virus up to 45 feet away and infected more than 50 people.

Those reports prompted the CDC to update its guidance about coronavirus transmission, officials have said. Adding to that urgency is the arrival of fall and colder weather, when people will be indoors.