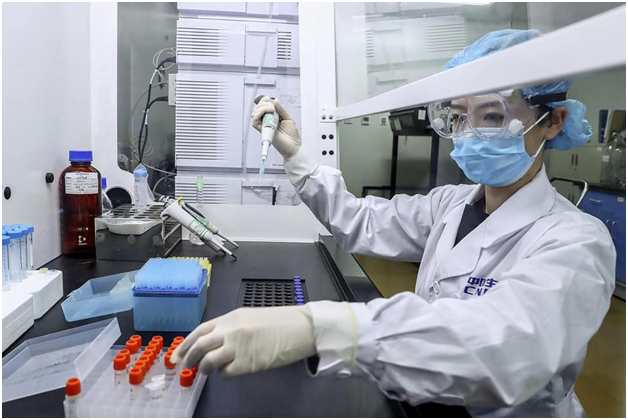 China says it began public use of coronavirus vaccine a month ago, bypassing clinical trials. Beijing health officials said they began dosing some medical workers and state-owned enterprise employees with an experimental coronavirus vaccine in late July under “urgent use” protocols, reports the Washington Post.

Beijing health officials said they began dosing some medical workers and state-owned enterprise employees with an experimental coronavirus vaccine in late July under “urgent use” protocols.

China is claiming the dubious honor of the first nation to roll out an experimental coronavirus vaccine for public use, saying it began inoculating high-risk groups in late July.

Beijing ahead of Russia?

For those keeping score, that would put Beijing’s civilian rollout three weeks earlier than Russia’s, with neither vaccine having yet passed standard clinical trials. Beijing health officials said Saturday they began dosing some medical workers and state-owned enterprise employees with an experimental coronavirus vaccine in late July under “urgent use” protocols.

Officials around the world have been debating how far they should suspend ordinary drug-development protocols to get coronavirus vaccines and treatments to market. Many governments declared early on that they would not cut corners in developing a vaccine, but they are proving amenable in practice to corner-cutting as the pandemic’s human and economic tolls mount.

The Beijing announcement followed a diplomatic controversy last week, when Papua New Guinea said it had turned back a group of Chinese miners who had received an experimental coronavirus vaccine.

There were signs of impatience in the White House as Beijing trumpeted its vaccine rollout over the weekend. President Trump tweeted Saturday alleging that either the Food and Drug Administration or the “deep state” was delaying progress for a U.S. coronavirus vaccine, without providing substantiating detail. On Sunday, Trump touted the FDA’s emergency authorization of convalescent plasma as a treatment for covid-19, the disease caused by the novel coronavirus.

The standard approval process for a new vaccine takes years and requires the observation of large numbers of patients over time to ensure safety and efficacy. The United States and China have both pledged to bring vaccines to market by the end of this year or early 2021, an unprecedented speed that requires gargantuan factory investments before the vaccines have passed safety tests. Now Beijing and Moscow have pushed the timeline up further, with large numbers of citizens essentially being asked to serve as test subjects as an act of patriotism.

Vaccinating food market & transport workers in the next step

On Chinese state TV on Saturday, Zheng Zhongwei, head of China’s coronavirus vaccine development program, said that “urgent use” of Sinopharm trial vaccines were launched on July 22, with initial use for medical workers and some state-owned enterprises. This came a month after China’s military began inoculating troops with an experimental vaccine.

Authorities are considering expanding the inoculations this fall to employees of food markets, transport systems and service industries, he said.

“In order to prevent the disease spread in the fall and winter, we are considering a moderate expansion in the program,” he said. “The purpose would be to first build an immunity barrier among special groups in the population.”

Can personal testimonials of officials be taken seriously?

This month, Russian President Vladimir Putin announced that his country was the first to approve a vaccine for the coronavirus. In response to critics who questioned the safety of the fast-tracked vaccine, Putin said his own daughter has received it.

Personal testimonials of experimental treatments by top officials are not typically part of the drug-discovery process. But it has happened repeatedly in the pandemic, as countries’ leaders try to shore up morale with few tools at hand.

In China, the head of the country’s Center for Disease Control and Prevention and prominent executives have announced they have received experimental doses of a coronavirus vaccine. And in the United States, Trump has touted his use of hydroxychloroquine.

Confusion over delay in public announcement

One point that remains unexplained is why China chose to delay its announcement of the public rollout of a trial vaccine for a full month. It could reflect caution among authorities, as a quiet rollout would be easier to end if those inoculated reported severe side effects.

On Saturday, Chinese health officials said few people who were given the experimental vaccine so far had reported adverse effects, and none reported fevers. They did not give a number of how many have received the trial vaccines.