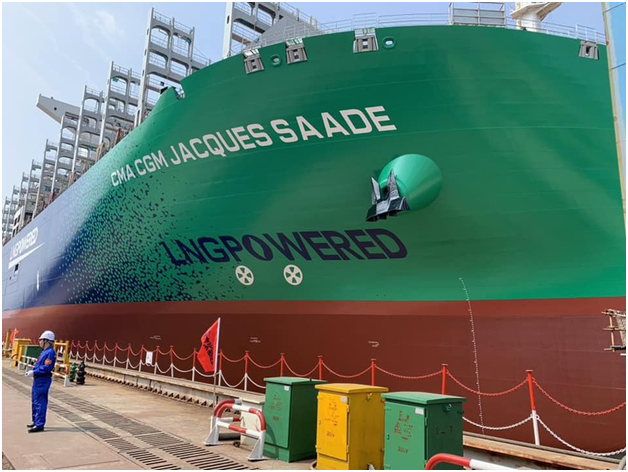 LNG powered vessels have been at the forefront of the shipping industry’s fight against global warming. Spearheading the global effort is the French shipping behemoth CMA CGM, which is all set to receive its first ultra-large LNG-powered containership after the vessel’s gas trials.

The CMA CGM JACQUES SAADE is currently in China’s Shanghai Jiangnan-Changxing Shipyard, as shown by the vessel’s AIS data.

The vessel was initially launched in August 2019, which then underwent sea trials in 2020. Now, the 23,000 TEU LNG powered ship is all set for delivery. It is predicted that the ship will be fully inducted in service within September, plying on the vital Europe-Asia route.

Giant LNG-bunkering vessel GAS AGILITY, owned by Japan’s Mitsui Osk Lines (MOL) and chartered by Total arrived off Rotterdam on Aug 22 and is expected to bunker LNG to Jacques Saade, as well as to eight of its other CMA CGM sister vessels.

CMA CGM has declared that all ships will be of 400 metres length, thereby giving the company an edge in the plummeting container shipping market.

In an earlier statement, the company had already declared that it plans to induct some 20 LNG powered vessels under the aegis by 2022, in compliance with IMO regulations.