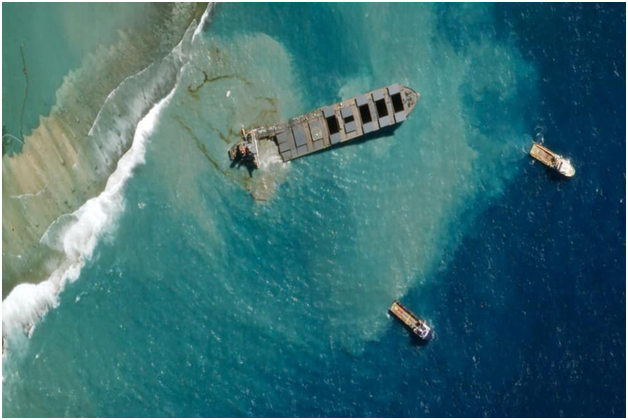 -A Japanese ship that ran aground on a coral reef off Mauritius may have changed course to get a mobile data signal for a birthday celebration on board.

-The M.V. Wakashio crashed into the coral reef barrier on July 25 and leaked almost 1,000 tonnes of fuel oil into Mauritian waters.

-The vessel’s captain was taken into custody on Aug. 18 for endangering safe navigation as Mauritian authorities.

A Japanese ship that wrecked off the coast of Mauritius in July and sparked one of the worst environmental disasters in the country’s history may have run aground because of birthday celebrations on board at the time, reports Monga Bay.

How The Ship Wreck Happen?

That’s according to a statement from the Panama Maritime Authority (AMP), in the latest development from the July 25 wrecking of the Panama-flagged and Japanese-owned M.V. Wakashio, a bulk carrier. The ship, bound for Brazil from Singapore, was sailing through Mauritian waters when it ran aground on a coral reef and leaked almost 1,000 tonnes of fuel oil.

In its statement published in Spanish on Sept. 7, the AMP, which is collaborating in the investigation into the accident, said the ship diverted its navigation plan, possibly in relation to “the celebration of the birthday of one of the crew members.”

“[T]he change of course is produced by indications of the captain of the boat, who gave instructions to approach about 5 miles away from the coast of Mauritius, looking for a telephone and internet signal, so that the crew members could communicate with their families,” the AMP said.

The Wakashio’s captain was taken into custody on Aug. 18 for endangering safe navigation. According to the government, the ship had failed to respond to several calls from the Mauritian Coast Guard.

Mauritius’s environment minister, Kavydass Ramano, called it an “unprecedented” crisis, and the prime minister declared a national emergency on Aug. 7, a day after oil began leaking from its tank.

Questions Raised In The Investigation

The AMP said its investigation into the cause of the grounding was still in the preliminary phase. It also raised questions about the use of the electronic navigational chart (ENC). “It seems that the wrong chart was being used and with the wrong scale, which made it impossible to properly verify the approach to the coast and shallower waters,” the AMP said.

-Satellite data analysis reported by Forbes shows the ship changed course on July 21, putting it on a direct collision path with the island.

-The outlet also reported that weather conditions in the days leading up to the crash were not adverse, discounting bad weather as a possible explanation for the move.

Some observers say the missteps could be linked to the stress that ship crews are under in the upheaval caused by the COVID-19 shutdowns. It has become challenging for shipping operators to make crew changes, leading many seafarers to be stranded at sea, away from their families for long periods.

Monetary Pledge To Revive The Ecosystem

The Wakashio ran aground on the reef close to at least three ecologically important sites: a Ramsar wetland, a coral island hosting rare and endemic birds, and a marine protected area. Environmentalists say they fear the spill will have lasting effects on the coral reefs, mangroves and fisheries in the region.

-Nagashiki Shipping, the owner of the Wakashio, will also be contributing to this initiative, called the Mauritius Natural Environment Recovery Fund.

-The money will go toward mangrove recovery, coral reef protection and safeguarding Mauritius’s rare flora and fauna, and for research work.

The Japanese government has also offered aid, but the value of its commitment is undecided. Japanese media have reported that Mauritius is seeking 1.34 billion Mauritian rupees ($34 million) from Tokyo.

Mauritius is also seeking compensation from Nagashiki Shipping. It has started the process of collecting claims from residents impacted by the crash and the spill.

Mauritian authorities have come under increasing scrutiny at home for letting the ship remain on the reef for more than 10 days, even as choppy waters damaged the vessel and ultimately led to a breach in the fuel tank. The ship broke into two on Aug. 15.

A controversial decision to sink the front half of the ship on Aug. 25, and the beaching of dozens of dolphins and whales days just days later, fueled further discontent. The causes of the deaths of the cetaceans are yet to be determined.

On Aug. 29, thousands of people marched in the streets of the capital, Port Louis, to protest what they see as the government’s mishandling of the crisis. Another protest was held in Mahebourg, an important fishing village, on Sept. 12.

Meanwhile, the stern of the broken vessel remains lodged on the reef. Efforts are underway to remove it before the Indian Ocean storm season starts in November.