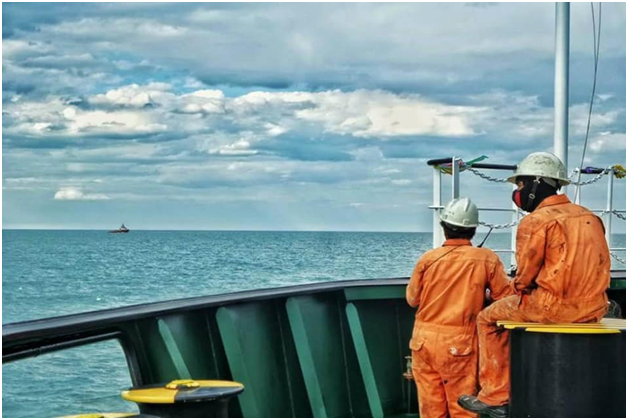 -The International Transport Workers’ Federation’s (ITF) Australian branch said seafarers were kept working on ships for as long as 18 months.

-As a result, they are unable to set foot on land because of Australia’s COVID-19 quarantine restrictions.

-The Mission to Seafarers Gladstone, a charity that aids international ship workers arriving in the Port of Gladstone.

-It knew of seafarers suffering from ‘extreme’ ill-health after spending periods of up to 16 months at sea, and that anything beyond 11 months breached conventions.

A recent news report in ABC News written by Jasmine Hines and Jemmima Burt cites International Transport Workers’ Federation saying that Seafarers are forced to spend up to 18 months on ships.

Dean Summers, the ITF’s Australian coordinator, says the rising demand for cargo shipping at a time when international cargo flights have all but stopped, is resulting in a “crew-change crisis”.

Mr Summers said workers from all over the world had been “cajoled, sometimes bribed, very often threatened” to extend their contracts to keep ships moving and avoid docking at ports for long.

“If those ships stop inside ports, then those ports are rendered useless and other ships can’t come and go.”

“As it is now, [the Federal Government] passed all those responsibilities back to the states; we’ve got each state making different determinations and each state is asking for some sort of leadership.”

The ITF has called on the Federal Government to create a special taskforce to investigate issues surrounding crew changeovers.

Since June, the Australian Maritime Safety Authority (AMSA), which is responsible for enforcing international shipping obligations, has received 129 complaints, 91 of which relate to seafarers spending more than 11 months onboard vessels.

AMSA said it investigated every complaint it received and either inspected the ship when it arrived in Australia or referred the complaint to the ship’s home country.

It said it had detained 11 ships since July for breaches of the Maritime Labour Convention, including the systemic underpayment of workers and failure to provide decent working conditions.

A spokesperson for the Department of Infrastructure, Transport, Regional Development and Communications said the Government had been working with states and territories to facilitate a COVID-safe approach to crew changes.

“The Australian Government recognises the importance of shipping and seafarers to Australia’s supply chains,” the spokesperson said.

“[It] acknowledges the COVID-19 pandemic has presented unprecedented challenges to the maritime industry, including making crew changes more difficult due to border closures and quarantine arrangements.”

“But we need to keep shipping operating to move our imports and exports to support our economic and social welfare.”

The Government said it took any welfare concerns raised seriously, and that AMSA continued to investigate complaints relating to seafarer welfare.

The spokesperson said when deficiencies were identified they were responded to appropriately, through methods such as putting vessels in detention.

“AMSA’s enforcement of matters, such as compliance with the Maritime Labour Convention 2006 and port and flag state control inspections, as well as its practical approach to crew changes and time at sea, will continue to uphold Australia’s international obligations on seafarer pays and conditions,” the spokesperson said.

“Maritime Safety Queensland is working through these enormous problems … and finding ways to get seafarers back home and taking a bit of pressure off,” Mr Summers said.

“Not to the extent that’s required — we can’t crew change as many as we want to — but at least they’re working towards alleviating the problem.”

Mr Summers said Australia’s huge export market for products such as iron ore and coal, as well as its geography as an island nation, meant it was particularly at risk of disruptions to sea shipping.

Before the pandemic, he said approximately two seafarers died at sea every three months, but no international data was kept.

“We do keep figures on how many cattle and sheep die on ships because that’s a topical issue,” Mr Summers said.

“But there is no international collation of those figures and it just shows you what the world thinks of international seafarers.”

The Mission to Seafarers Gladstone

The Mission to Seafarers Gladstone general manager Jessica Mulhall said approximately 60,000 ship workers came through the port every year and the charity helped up to 16,000 of them, but this year fewer than 6,000 had used the centre’s services.

She said many “desperate” seafarers had not had a break since the worldwide pandemic began.

“They’re suffering extreme mental health [issues] and really difficult conditions for them to be in for 15 and 16 months at a time now,” Ms Mulhall said.

She said seafarers usually worked seven days a week over a nine-month period, with on-shore leave once a month, but many continued to work through the pandemic, while replacement crews sat at home without an income.

The centre had dealt with an increase in mental health issues among workers including loneliness and isolation.

She said there had also been an increase in reports of crew members not being paid for their time spent in quarantine.