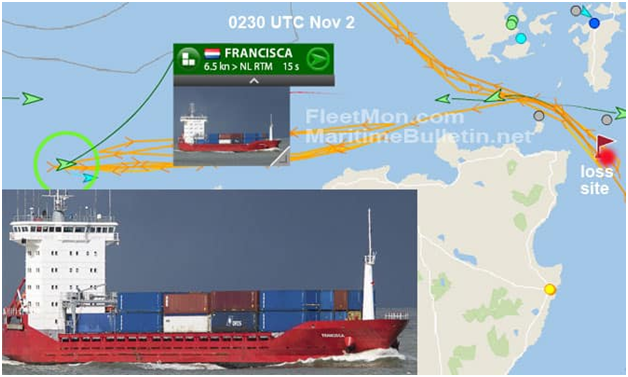 Nov 2 0230 UTC UPDATE: At least 33 containers were lost, UK CG responding, with deployment of tug, plane and coastal navigational providers. FRANCISCA meanwhile, is cruising in legs back and forth, alongside northernmost Scotland coast. As of 0230 UTC Nov 2, she was still cruising, with tug nearby, probably she’s still having problems with containers on board, remaining in danger of falling overboard.

Understood general cargo ship FRANCISCA lost at least 10 containers at around midday Oct 31 in North sea west of Duncansby Head, northeast tip of Scotland, while en route from Iceland to Rotterdam. The ship turned back, passed Pentland Firth and as of 1430 UTC was sailing in northwest direction, probably sheltering/waiting out stormy weather.