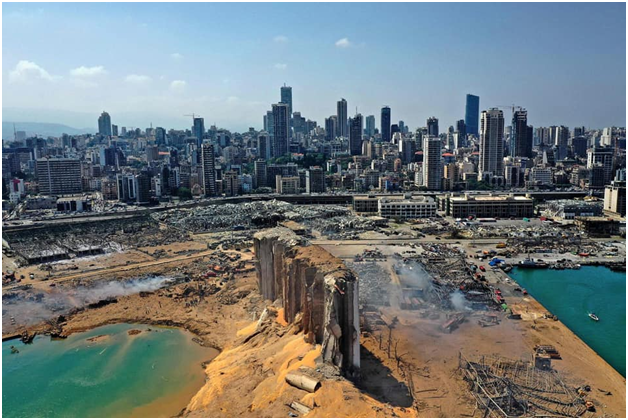 The Beirut blast shook the maritime world like never before. The already pandemic hit the maritime industry is gasping to deal with maritime regulations and legal issues arising of the incident. Dr. Habib Al Mulla of the Baker McKenzie legal firm wrote to CNN about this maritime fraud.

Here’s how he analyzed it as published in an article in Lexology.

The horrific explosion that recently took place at the port of the city of Beirut is a tragedy for its people. The possible causes of the explosion have brought to mind the cases of maritime fraud that many observers overlook. In recent years, the shipping and maritime trade industry has witnessed a sharp increase not only in the number of fraud cases but also in the diversity and sophistication of fraud. Fraudsters are becoming more creative in laying out and executing their plans, including using modern technology such as computer hacking while also preserving some tried and tested traditional methods, such as document fraud. Shipowners are also finding themselves under pressure to earn new business and, to that end, many of them ignore exercising due diligence when dealing with new business partners. While ports are adopting new technologies this too has the potential to enable new certain types of fraud (such as automating container operations).

Back to the explosion that took place in Beirut, news circulating about this explosion stated that a vessel named MV Rhosus was loaded with a shipment of ammonium nitrate. The vessel is registered in the Republic of Moldova and set sail from Batumi in Georgia bound for Mozambique. It is reported that it suffered technical issues on its way while it was in the Mediterranean Sea, so it headed to Beirut port, where it was impounded in 2013 and the shipment was confiscated because the shipping papers were not in order.

The captain and three crew members spent 11 months on board while the legal dispute continued. Then, the Ukrainian sailors were released after the intervention of the Ukrainian government. Once they left, the ammonium nitrate shipment was unloaded and it remained in storage ever since.

Boris Prokoshev, who was MV Rhosus’s captain at the time, stated that in 2013 the ship’s owner told him to dock in Beirut to pick up additional cargo. The crew was required to load heavy road equipment and transport it to the Jordanian port of Aqaba, then resume their journey to Mozambique. Yet, since the ship was old, he decided not to take the risk and the abandoned vessel sank according to an email from a lawyer, who was working on the case in 2018. Levan Burdiladze, the Rustavi Azot plant director, told Reuters that the decision to store the materials in Beirut port was a serious violation of safe storage procedures.

There is other news that has been circulating stating that the ship is not Russian, but rather it is a steamer owned by an Iranian-Russian business executive residing in Georgia, who is known for his support of the Iranian Revolutionary Guard, and that a scenario was created in which the vessel and its cargo violated the conditions, which led to the shipment being confiscated.

Maritime fraud is taught in the maritime academies from the 90s, and it is not fraud in its criminal sense, but rather an agreement by several people to use maritime customs and laws to reach a result other than what commercial operations are intended to do. There is no definition of the concept of maritime fraud in the penal laws, nor are there any texts in Arab laws dealing with maritime fraud.

The image of maritime fraud is based on the use of loopholes in the laws to achieve illegal goals and portray the matter as the process of transporting materials from one port to another, when in fact it is the smuggling of prohibited or dangerous materials.

Old ships are used and radioactive or chemical waste or hazardous materials are loaded onto them and disposed of in international waters or in some ports with poor procedures.

Whereas the maritime law allows ships that experience problems to anchor at the nearest seaport for repairs, the ship remains in the port under the pretext that it is dangerous to undergo reparations because of the materials it contains. The owner of the ship then abandons it with its cargo and asks the judiciary to unload the cargo due to it being dangerous.

By applying these facts of the known cases of maritime fraud to the case of the MV Rhosus, it becomes evident that the ship owner’s abandonment of the vessel is an applicable procedure in the maritime law when the ship has debts owed to the port in terms of fees and storage fees, as the ship owner then uses the right of abandonment, under which the owner abandons the vessel and its cargo to the creditors. It is a type of determination of liability in maritime law.

In most cases, the port and the creditors impound the vessel and sell it in an auction.

Likewise, if the owners of the cargo do not come forward to claim it, the authorities will seize the cargo and sell it in an auction in fulfillment of their storage fees.

This procedure is sometimes used as a kind of maritime fraud.

(i) the fraudsters (or terrorists) contract with the owner of a vessel to transport cargo;

(ii) the vessel enters the port for refuge, and then

(iii) the captain and sailors leave the vessel ⁠— they may be members of the fraud team. The crime ends with unloading the cargo at the port of refuge because it is not allowed to enter the country directly and the vessel is sold or abandoned.

The fraudsters, through an agreement with some official authorities, gradually withdraw it from storage and pay the warehouse fee while being out of the picture, and the cargo is deemed to be in the custody of the customs authority under the order of the summary actions judge.

The United Nations issued a number of recommendations regarding the transport of dangerous cargo .The recommendations are enshrined in a model regulation that has gone through a series of amendments which is now in 17th edition.

-Article 12 of the regulation stipulates that certain measures should be taken each time dangerous cargo is presented for transport, in order to ensure that all those who are likely to deal with these goods during transport are fully aware of the risks inherent in the subject cargo.

-Article 16 also stipulates that emergency precautions should be put in place in order to protect people, property and the environment in the event of accidents or accidents that may occur during the transport of dangerous cargo.

-Article 2-1-1 of the general provisions stipulates the prohibition against transporting any potentially explosive or reactive substance in a dangerous manner under normal transport conditions.

-Article 3-1-4-1 also stipulates that transportation sites, cargo warehouses and storage areas are appropriately secure and far from the general public.

-Article 3-4-1 on dangerous cargo with severe consequences, which is cargo that can cause large numbers of victims and widespread destruction, requires the authorities concerned to take detailed safety measures and develop safety plans with regard to handling these materials. Ammonium nitrate is included in the list of dangerous goods.

The principle is to ensure that such goods are imported by countries and are unloaded and stored through military docks. However, given that Lebanon has armed organizations other than the armed forces, there is a problem with transporting and storing cargo and weapons outside the official framework.

The horrific explosion in Beirut sheds light on maritime fraud operations and calls for international cooperation to conduct legislative reforms to deal with and prevent such operations, considering the heavy human losses and the great material damage they cause.