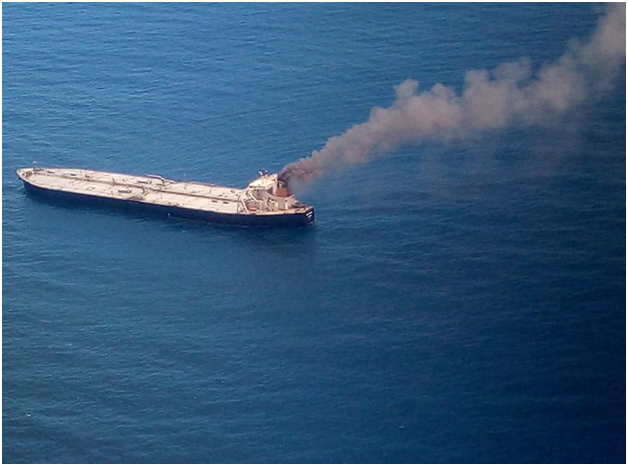 A fully loaded oil tanker has caught fire off the east coast of Sri Lanka, which has dispatched an aircraft and two navy ships to help in the rescue, a Sri Lankan navy spokesman said on Thursday. The New Diamond, a very large crude carrier (VLCC) chartered by Indian Oil Corp (IOC), was heading to the port of Paradip in India, where the state-run firm operates a 300,000 barrel-per-day refinery.

The Sri Lankan spokesman, Commander Ranjith Rajapaksa, said the VLCC was ablaze about 20 nautical miles off the east coast.

Earlier, sources had put the vessel’s location off Colombo, the capital of the Indian Ocean nation.

‘The Sri Lanka air force have scrambled an observation aircraft and the navy have sent in two ships to help with rescue efforts,’ Rajapaksa told Reuters.

Sri Lanka’s Marine Protection Authority said it would take measures to prevent any possible oil leak from the tanker, which was carrying 270,000 tonnes or the equivalent of about 2 million barrels of oil, domestic media said.

An industry source said oil product tanker Helen M, on a time charter with India’s Reliance Industries, had also joined the rescue operations. ‘The fire happened at 7.45 as India time,’ added the source, who spoke on condition of anonymity. ‘The nature is explosion and fire and serious injury to the crew. The crew wants to abandon the ship.’

Reuters could not immediately confirm these details independently. There was no immediate comment from IOC, Reliance Industries and Kuwait Petroleum Corp.

Source : “The Indian Express” via Dailyhunt