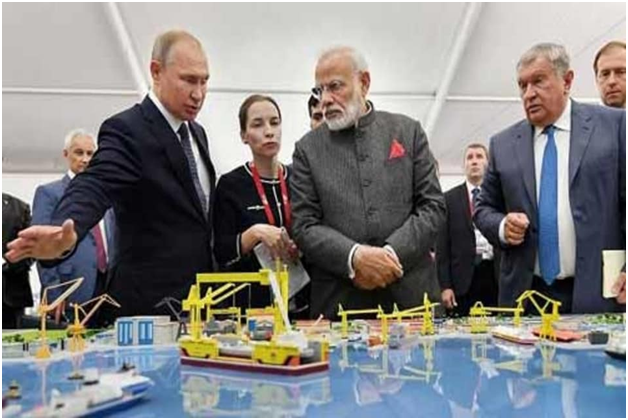 -India and Russia plan to establish maritime relationship including shipbuilding industry.
-It includes repair facilities besides expediting maritime links through International North South Transport Corridor (INSTC) and Vladivostok-Chennai shipping links.
-The bilateral collaboration focuses on ship design and building, repair, logistics, MRO, inland waterways and ports sectors.
-The Indo-Russian MRO partnership in the shipping sector will be a win-win proposition with 30,000 ships visiting Indian ports annually.
-Delhi has been in dialogue with Russia cooperation in connectivity via the Northern Sea Route and joint energy projects in Arctic region.

Webinar between India and Russia

This news is based on the recent webinar meeting that was held on this Thursday with regard to bilateral relationship between the two countries on developing niche in shipping industry.

Participants in the webinar

The participants of the webinar included the Chairpersons of Chennai Port Trust and IWAI, Secretary Shipping, Trade Commissioner of Russia to India.

The Indo-Russian maritime partnership got a boost with the last annual summit held in Vladivostok.

Besides, expediting INSTC that aims to connect Mumbai with St Petersburg via Indian Ocean and then via Iran and Azerbaijan, revival of Chennai-Vladivostok shipping link is also on the cards.

While Delhi seeks an inclusive Indo-Pacific region with participation of Russia, Moscow is exploring to increase its presence in the region which currently remains limited in scope.

This shipping link will also help India to expand its footprints in Far East Russia based on Act Far East policy.

This shipping link that existed during the Soviet Union period would enable to transfer cargo between Chennai and Vladivostok in 24 days compared to over 40 days currently taken to transport goods from India to Far East Russia via Europe.

A wealth of natural resources

Far East Russia has a wealth of natural resources such as land, timber, mineral and other resources like tin, gold, diamonds and oil and natural gas.

Several initiatives and announcement made to attract investments in the region that includes, an agricultural SEZ, the Vladivostok Free Port Project.

Near future plans for India

Oil and mineral wealth in Arctic

The Arctic contains a wealth of petroleum and mineral resources.

Currently, the region produces about one tenth of the world’s oil and a quarter of its natural gas.

The Russian Arctic is the source for about 80 percent of this oil and virtually all of the natural gas.

The most developed sector of the region, the Russian Arctic also holds abundant deposits of nickel, copper, coal, gold, uranium, tungsten, and diamonds.

The Northern Sea Route – is the main sea route in the Russian Arctic.

The Route crosses seas of the Arctic Ocean (Kara, Laptev, East Siberian and Chukotka) and partially the Pacific Ocean (the Bering Sea).