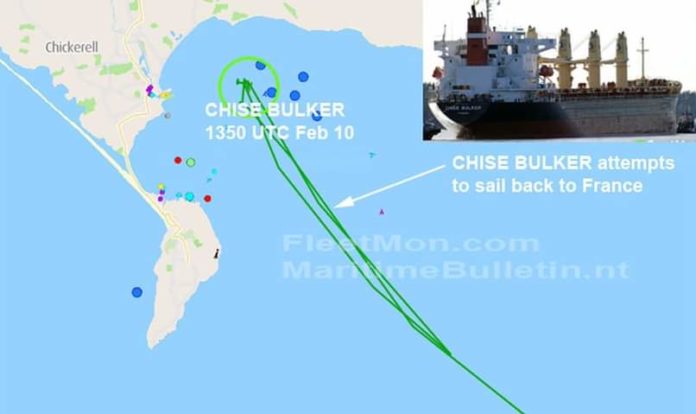 Japanese bulk carrier seized by migrants in UK UPDATE perpetrators arrested
Japanese bulk carrier on Feb 9 was seized by seven migrants (or stowaways) while being off Portland, UK, English Channel, according to Trade Winds report. Bulk carrier left Rouen France on Feb 8, understood her destination being Portland, though it’s not confirmed. Migrants were discovered by crew on Feb 9 when the ship was approaching Portland, understood Master decided to turn back and sail to Le Havre, to disembark stowaways. They’re, kind of rioted, tried to break into bridge or broke into bridge, injuring one or more crew. The story is in places, confusing and contradictory.
“Seven stowaways are believed to have attempted to take control of a bulker anchored off the English south coast, after French ports refused to let them disembark”, says Trade Winds. Does it mean that they’ve been refused landing in Rouen, and if so, how come that the ship’s crew found them only in UK waters?
Anyway, Master panicked or was very distressed, he called authorities and asked for immediate assistance. Migrants rioted when the ship tried to sail back to France, apparently unwilling to return to France and probably, being handed over to French authorities. Master had to take bulk carrier back and anchor off Portland late Feb 9. As of 1350 UTC Feb 10, the ship remained in the same position.
By the way, UK Crown Prosecution Service dropped all violence/hijack charges against migrants, who seized MT Nave Andromeda in Oct last year.

UPDATE: Dorset Police said: “A total of seven individuals – believed to be Albanian nationals – were arrested by police and escorted from the ship. They will be considered by the Border Force and UK Visas and Immigration for potential offences.”