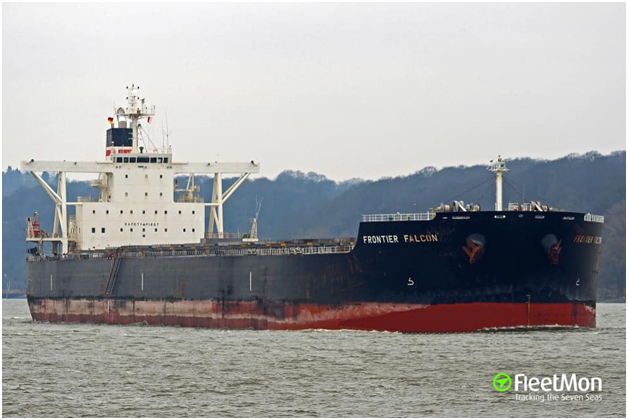 Statement re Frontier Falcon from Owners and Charterers / Drugs found attached to hull.
London August 26,2020
Owners and Charterers of the 2011 built bulk carrier, FRONTIER FALCON, report that the vessel completed her cargo operations at the Port of Icdas, Turkey on 0930 hrs local time 25th Aug.
The vessel however remains in the port, at anchor, as the current Master, Chief Officer and Chief Engineer have been taken ashore to continue assisting the Authorities with their enquiries with regards to the confiscated 25-kilogram package of drugs found attached to the ship’s hull.
All state their innocence and that they have no involvement, whatsoever, in the incident.
As enquiries from the Authorities are likely to take time, as the case involves drugs, Owners believe that the above-mentioned crew members are likely to spend some more time in Turkey, before they return onboard.
For this reason and to prevent any delay, Owners are sending a new Master and Chief Engineer to the Port of Icdas with eta to join the ship on 27th Aug.
Crew members who are required to remain in Turkey will be repatriated after the enquiries are completed.
At no time was the vessel detained by the Authorities, as it was concluded that the vessel itself is not involved in any illegal trade.
The ship is authorized to depart upon arrival of the new Captain and Chief Engineer.
Owners and Charterers deplore any involvement with the carriage of drugs and have strict policies in place to prevent such incidents. They will cooperate fully with the local investigations to establish responsibility for this illegal shipment.
Comment:
From the very beginning, allegations of Master and crew involvement seemed to be highly doubtful, it just doesn’t make any sense. Turkish authorities as their compatriots in other countries, are always ready and happy to seize and accuse those at hand, namely crew.
Initial news:
Japanese capesize bulk carrier cocaine bust, Master and senior officers detained VIDEO
August 23, 2020 6:20 am
Capesize bulk carrier FRONTIER FALCON was berthed at Icdas port, Turkey, Marmara sea, late Aug 19 on arrival from Colombia. On Aug 22, joint team of police anti-narcotics division and Coast Guard, searched ship’s hull and found a container or a box, attached to hull in aft section. Box contained packages with cocaine, totaling 25 kilo. Hull inspection with deployment of divers was to be continued. According to official statement, 7 crew including Captain were detained, caught allegedly, in the process of procuring the packages from a box. Involvement of the crew including Captain and senior officers, is not yet conformed, details remain sketchy and unclear. Usually, when drugs are found in hideouts, law enforcement bodies are either tipped off or monitor suspicious ships long before detention and search.