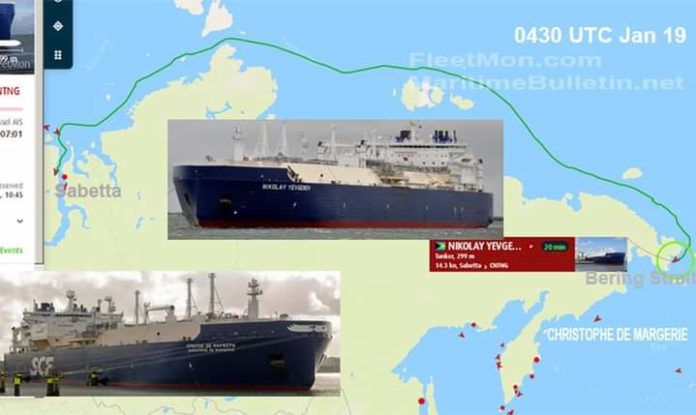 LNG tanker NIKOLAY EVGENOV with LNG shipment from Sabetta, Yamal, Russia, bound for China, was transiting Northern Sea Route, Russian Arctic, in the wake of LNG tanker CHRISTOPHE DE MARGERIE, carrying the first lot. Both tankers were transiting NSR without icebreakers, in record-low temperatures, and record breaking time of the year, in January. Considering all odds, the idea of such an untimely transit looks kind of reckless. According to Russian media sources, while CHRISTOPHE DE MARGERIE safely completed transit, NIKOLAY EVGENOV reportedly, suffered one of three azipods damage, on final legs of the transit. If media sources are correct, the ship probably, will have to undergo dry docking in China or Korea, after offloading cargo. Charterer is the NOVATEK company, which runs Yamal LNG project. NOVATEK is planning several more trips via SNR, but next tankers will be escorted by icebreakers. Even NOVATEK and its’ CEO, one Mikhelson, got it – Arctic remains Arctic, all the route from Sabetta to Bering Strait being completely ice-covered (albeit young year-old, 0.3-2 meters thick), and this is no joke. It’s dangerous even with icebreakers, and though all media experts explain highly risky venture by exceptionally high LNG price in Asia, skyrocketed by exceptionally cold winter, it is, highly likely, only part of the riddle. There was, almost undoubtedly, some pressure implied on the part of China, to coerce involved parties into this dubious undertaking.