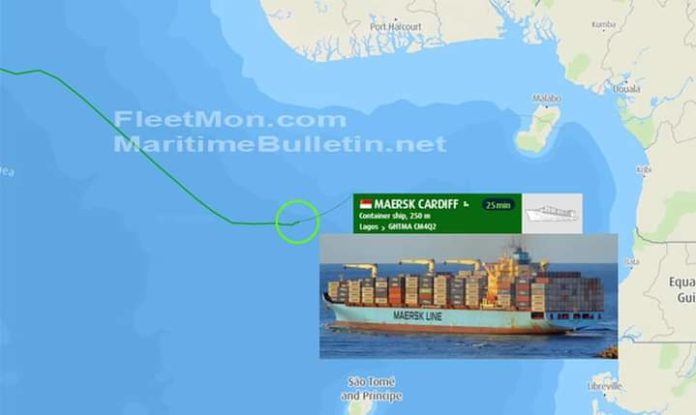 Container ship MAERSK CARDIFF was attacked SSW of Port Harcourt at around 2000 UTC Jan 13 and later at 0000 UTC Jan 14 she was probably, boarded, or there was a second attack. As of 0230 UTC Jan 14, MAERSK CARDIFF was drifting near attack site with Nigerian security boat at her side. AIS is on. The ship is en route from Tema Ghana, port of destination not identified.
Jan 14 UPDATE: Understood the ship was boarded, but crew mustered in citadel, and remained safe. The ship resumed sailing at around 0800 UTC. There is unconfirmed report, that another ship, LNG tanker, was approached by two boats, but tanker escaped attack by speed and maneuvering.
Posted in Maritime Security by Mikhail Voytenko on Jan 14, 2021 at 03:04.