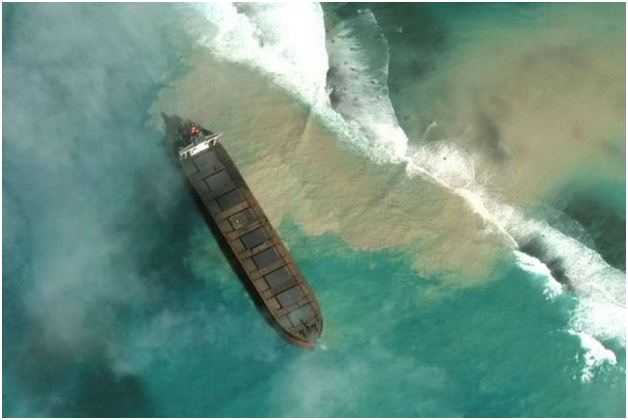 -A damming new report from the International Transport Workers’ Federation (ITF) is shedding more new light on the circumstances surrounding the Wakashio disaster.

-It turns out that the Wakashio only had 20 crew on board.

-For vessels of this class the crew size should have been 24. This is because the Wakashio was 13 years old.

-Crew sizes are larger for older ships ships as the maintenance workload starts to increase.

Roles of the Crew

The roles of these crew are clearly specified to ensure ships have the right mix of suitably qualified crew on board.

To make matters worse, three of the 20 skeleton crew on board Wakashio were on extended contracts when the vessel grounded off Mauritius on July 25, two of whom had been on board for over 12 months.

This would have put the ship owner and those responsible for crewing the vessel in breach of several international labor and ship manning regulations.

Captain Nandeshwar had his six-month contract extended by three months on May 1, a spokesperson for Japan-based owners Nagashiki Shipping had confirmed to Lloyd’s List on August 17.

A ship is required to have a Safe Manning Certificate on board. This would have specified that a crew of 24 would be needed for a 13 year old Capesize Bulk Carrier, like the Wakashio.

The only way to travel in breach of this Safe Manning Certificate, is with a ‘Certificate of Emergency Exception.’

“If the crew number goes below that required by the minimum safe manning certificate then the ship owner can ask class for an ‘Emergency Exemption.’ Otherwise the ship is unable to leave Port unless this has been granted.”

So where are the certificates of the Safe Manning levels and the ‘Emergency Exception’ to have allowed the Wakashio to travel with 17% fewer crew? How long had the Wakashio been allowed to operate with almost 1 in 5 fewer crew than was approved?

This now raises some important questions for the incident investigation, that the international community and media will be particularly interested in:

1. Was there a ‘Safe Manning Certification’ on board the Wakashio, and what did it say, given the requirements that the Wakashio had to be operated with 24 crew as a 13-year-old Capsize Bulk Carrier?

2. Was there a ‘Certificate of Exception’ to the Safe Manning Certificate, to allow the vessel to travel with a crew of 20? If so, when was this certificate issued?

3. Who initially requested the unsafe manning levels, and for what duration?

4. Given the pressures of fewer crew on board, it is critical to have proper documentation for watch duty and shifts, to ensure crew are not fatigued. What was the quality of the recordkeeping like on the Wakashio to ensure such important documents vital to shift and watch safety, were being adequately completed and monitored by the officers on board?

5. What would the additional pressure of a faulty ship engine have done to a skeleton and extended crew operating one of the largest ships in the world – a Capesize Bulk Carrier – on one of the longest journeys in the world – a Japan-Brazil roundtrip – for at least three months, given Covid-19?

A series of cascading failures explain the Wakashio disaster

The story of the Wakashio is starting to paint a picture of a cascading set of failures that had been warned about for months in advance:

-An understaffed and overworked skeleton crew

-Placed on an improperly kept vessel

-Just add in the pressures to the crew of extended duties due to Covid-19, and this was a disaster waiting to happen.

Now the Indian Ocean island of Mauritius is paying the price as the oil spill triggered an ecological crisis along 10% of its entire previously pristine coastline, and 125 square kilometers of corals remain off limits to tourists, fishermen and tour boat operators.

The ITF have mentioned they have been dissatisfied with progress on the unsafe staffing issue, and have since had to engage the UN Secretary General, Antonio Gutteres in order to make more progress.

This highlights the ineffectiveness of the current governance system around global shipping to take the right action on social or environmental issues, as well as the apathy and disregard with ship owners have viewed crew safety as a priority.