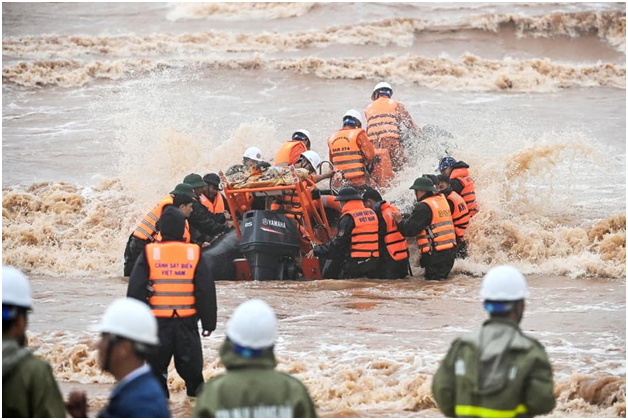 -Cargo vessel was swept away as it was docking at the Cua Viet Port amid serious flooding caused by days of torrential rains.

-Crew members and a fisherman were rescued three days after.

-All stranded men had been brought to safety, with the exception of one.

-The body of the missing crew washed ashore in Quang Tri Province’s Hai An Commune.

A final rescue mission by military forces saved eight people after they had been stuck in rough seas around 400 meters off the coast of Trieu An Commune, Trieu Phong District, Quang Tri Province, reports VNEXPRESS.

A cargo vessel was swept away as it was docking at the Cua Viet Port. This happened as the entire central region, including Quang Tri, was experiencing serious flooding caused by days of torrential rains.

The ship had 12 male crew members on board when it was swept away. The heavy rains, strong winds, and rough seas made it difficult for rescue efforts and the vessel sank to the bottom in shallow waters, leaving the crew stranded at sea.

Four out of the 12 crew members managed to reach the shore safely on Friday and Saturday. Finally, on Sunday the provincial authorities engaged military help including helicopters.

After the accident, local fishermen were requested for help. One of the local fishermen, who had managed to get to the ship, was the one who jumped off the sinking fishing boats.

Colonel Le Van Phuong, head of the Quang Tri Border Guards, said the weather conditions were harsh, and with the high waves and strong winds, “it was difficult for modern vessels to get close to the stranded ship so we had to rely on rudimentary boats and experienced fishermen for the mission.”

A crew member of the ship had also jumped into the sea. The duo had been holding on to the bow of the cargo vessel and suffered directly the brunt of the wind and waves.

The Vietnam Coast Guard personnel encountered a technical problem and failed to sail. About 30 minutes after the failure to launch the boat, a crew member, got close to the shore.

But he fainted just before the coast guards reached him as he had spent more than three days stranded at sea, lacking access to food and water when he was rescued.

Meanwhile, three members of the Vietnamese navy’s special force dragged the fisherman to the shore. The group was swept away repeatedly to as far as 800 meters away from the shore, but they managed to get back to safety after a tense hour and a half.

The fisherman was rushed from the shore to be given emergency aid as hundreds of locals watched from a distance.

Six men still on the ship were rescued by a military helicopter. As the rescue mission took place, storm Linfa was heading straight to the central region. It made landfall late Sunday morning in Quang Nam and Quang Ngai provinces.

Four flights were conducted during this mission. By Sunday, all stranded men had been brought to safety. But the owner of reported one missing crew member.

Unfortunately, it was later confirmed that a body washed ashore in Quang Tri Province’s Hai An Commune. It was unclear if he had jumped into the water or fallen as the ship was being swept away.