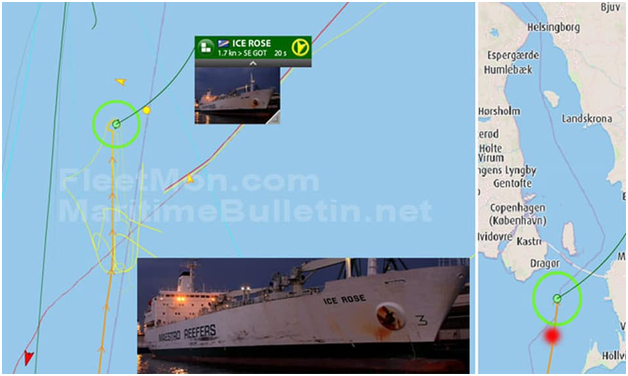 UPDATE: Reefer collided with Russian Corvette KAZANETS in a dense fog. Corvette sustained hull breach above waterline, and after collision, sailed towards Baltiysk Naval Base, Kaliningrad Region, Russia, under own power.

Danish and Swedish authorities reported collision between Russian Navy Frigate and a cargo ship in Oresund Strait south of Oresund Bridge in the morning Sep 23. Understood cargo ship – Swiss reefer ICE ROSE – is seriously damaged. Collision according to track, took place at around 0730 UTC or earlier, reefer was anchored at around 0800 UTC n of collision site. Frigate probably, was already damaged. There are at least CG and SAR boats and ships, both Danish and Swedish, near reefer. No frigate AIS, of course.