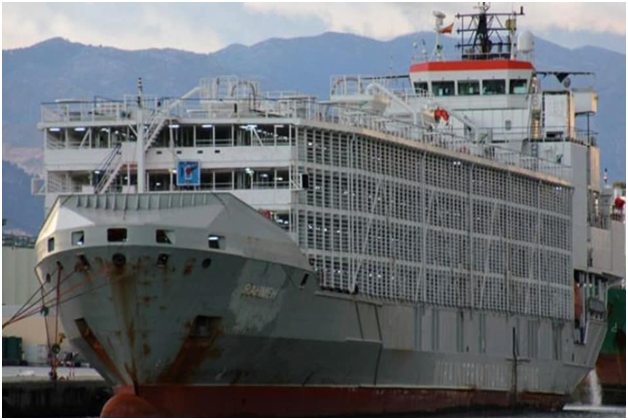 -New satellite analysis reveals that the Gulf Livestock 1 was the only vessel heading into the typhoon.

-The search was suspended due to bad weather on Saturday, when Typhoon Haishen was headed towards southwestern Japan.

-The ship had been carrying 43 crew members and nearly 6,000 cattle.

-Forty crew members are still missing but rescue efforts are being hampered by approach of Typhoon Haishen.

-kThe Japan coastguard found a second survivor after the Gulf Livestock 1 issued a distress call as Typhoon Maysak passed through the area.

According to a Reuters news report, Japan’s coastguard suspended the search and rescue mission for 40 missing crew from a capsized cattle ship in the East China Sea with no timing set for resumption.

Also, Nishan Degnarain writes for Forbes on how satellites track the final journey of Panama-Flag cattle ship heading straight into eye of Typhoon.

The ship heading straight into eye of a major typhoon in the East China Sea.

New satellite analysis reveals that the Gulf Livestock 1 was the only vessel heading into the typhoon.

All other vessels had steered clear of Typhoon Maysak, which has brought devastation along the Korean coast and had been the strongest typhoon of the year so far in 2020.

-The captain had relied on outdated weather information from a commercial service.

-The Coast Guard’s practices of grandfathering in vessels, exempting them from safer lifeboat standards.

-The owner’s failure to maintain a deteriorating vessel.

Two rescued and one dead

So far, two crewmen have been rescued while another died after being found unconscious on Friday.

“We resumed our search operation this morning by dispatching an airplane,” a local coastguard official said.

“But due to high waves, we could not send any patrol boats to the site.”

The Gulf Livestock 1 had sent a distress call from the west of Amami Oshima island in southwestern Japan last Wednesday as Typhoon Maysak lashed the area with strong winds and heavy seas.

The crew was made up of 39 Filipinos, two New Zealanders and two Australians.