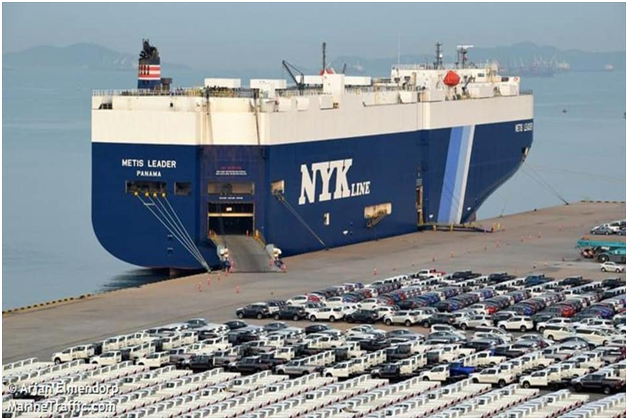 -Australia is starting to take a firmer line against ship crew abuse by major shipping lines.

-One of Japan’s largest shipping companies, NYK Line, was called out this week.

-Their Panama-flagged cargo ship, the Metis Leader, was delivering cars to Australia when it was impounded in port.

-It had been due to leave the Port of Melbourne on Wednesday October 21.

This follows involvement from shipping union, the International Transport Workers Federation (ITF). The ITF have been warning ship owners about the crew change crisis for months, and had put out a report called ‘Beyond the Limit’ this summer.

The UN Secretary General, the Pope, and many prominent world leaders have been calling for urgent interventions into global shipping, after what has been seen as a relatively weak and ineffective set of actions by the UN shipping regulator, the IMO.

Satellite providers like Inmarsat, have been providing additional support to seafarers during the Covid-19 crisis since April, to ensure strong internet connectivity between crews and their families on land.

The ITF revealed several violations on board the Metis Leader:

-Three seafarers had been on board for more than 15 months, including the ship’s captain

-Two seafarers had been on board for 14 months

-Five were on the verge of 12 months working abroad

The ITF Assistant Coordinator for Australia, Matt Purcell, said, “Keeping seafarers working aboard a ship for this long is both in violation of their rights and a recipe for human and environmental disaster.”

He went on to reveal that two Japanese manning companies from the ship owner’s agents had tried to stop union inspectors coming aboard to inspect the welfare of the crew and assist in rescuing the crew from the situation.

“The company tried to block us from coming aboard the ship and putting an end to them keeping these seafarers against their will,” Purcell said.

He went to say that the ship owner’s agents tried to use Covid-19 as an excuse to stop him coming aboard, despite the fact that in the same day the Australian State of Victoria had recorded just two new cases from a population of almost five million people.

“Clearly the company didn’t want us to learn the full extent of their deception of this vulnerable crew and their plans to carry on this forced labor charade into another month.”

According to the ITF, their contracts with the Australian Maritime Safety Authority covering the ship gave Purcell the right to board the ship and assess the crew’s situation in person.

“Following the detention of the vessel by Australian Maritime Safety Authority at our urging, five crew will be repatriated from Melbourne to the Philippines. The ship is not permitted to leave port until the company gets these tired and fatigued seafarers home and replaced by fresh crew.” said Purcell.

Insurance Marine News had been reporting that the vessel is now underway following new crew being flown over, but that no comments had been received by them from the managers named by the ITF.

The ITF said that the crew had been returned to their home country via Melbourne’s Tullamarine Airport.

Purcell said that the just-in-time nature of importing new vehicles means the shipping company would be losing upwards of USD $100,000 per day as the vessel laid idle in the waters surrounding Melbourne.

ITF’s Australia Coordinator Dean Summers said the case of the MV Metis Leader was a ‘wakeup call’ for the international shipping industry as the crew change crisis continued into its eighth month.

He warned that the ITF, its affiliates and authorities have the power to arrest and detain ships, until these wrongs are righted, regardless of the cost to ship owners and cargo owners.

Summers continued, “Crew change is possible in ports right across the world. We have been living with Covid-19 for eight months now, and so there is no excuse for delaying or deferring crew change. Repatriating crew and replacing them with a fresh team is the responsibility of employers and ship owners – and we will act to see that responsibility honored for every single seafarer.”

The ITF was very clear who was accountable. “Our message to ship owners, manning agents, charterers and the companies which rely on ships to transport their goods, is: if you don’t ensure your crew is changed, we will work to see your ships are stopped and the tired workers operating them freed from the shackles of forced labor.”

“Ensure your supply chains are free from exploitation this Christmas: or we will,” said Summers.

Reform of the UN Shipping Agency, the IMO

As seen with the Metis Leader, it is agencies like Australia’s AMSA that should be the driving force at the UN shipping regulator, the IMO.

Yet, Australia is only a Tier ‘B’ country in the IMO’s powerful IMO Council, whereas countries like Panama and Japan are powerful ‘Tier A’ countries but have both been shown in this case (and many others) to be behind some major shipping safety and environmental violations.

This is crucial in making sure those with the right values are driving some of the world’s most important public institutions for the public interest.

The $80 million a year IMO was founded under the Charter of the United Nations that was signed in San Francisco at the end of WW2.

Yet, the IMO went back on climate promises last week, driven by Japan, in policies that now threaten the Paris Agreement on Climate Change.

Is this yet another case of an industry where returns are being privatized but the risks to the environment and workers are socialized?

It is time for shipping to pay for the full footprint of its operations, and invest in the areas needed to transition to cleaner, greener, and safer transportation.

If the shipping companies and the IMO are unable to lead the reforms on their own, it is time for major Governments to start stepping up, as Australia has now started to do.