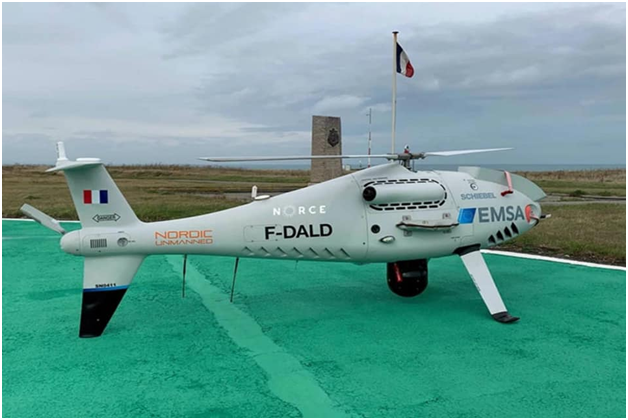 -The Ministry of the Sea is deploying on a trial basis a sniffer drone in the strait of Pas-de-Calais, the world’s busiest area for ship movements to curtail ship emissions.

-The drones are made available to France by the European Maritime Safety Agency (EMSA).

-Operations have started on 23 of September for a period of three months with flights taking off from the Regional Surveillance and Rescue Operational Centre (CROSS).

-The information collected from the drone will be transmitted live and recorded in EMSA’s RPAS data centre.

Efforts to enforce the strict sulfur limits on ships sailing in the control zones of Europe are being assisted with high-tech sulfur sniffing drones, reads a press release from EMSA.

France, working with drones from the European Maritime Safety Agency (EMSA), has become the latest authority to launch the monitoring program.

To tighten control over ship emissions in French waters, the Ministry of the Sea began deploying a sniffer drone in the strait of Pas-de-Calais, one of the world’s busiest shipping lanes. The three-month trial program began on September 23.

-The area where the monitoring is taking place is part of the North Sea Sulphur Emission Control Area (SECA), where tighter pollution rules apply.

-Ships navigating in this area are required to use fuel with a sulfur concentration not greater than 0.1% versus the limitation in other areas of 0.5%.

The unmanned remotely piloted aircraft system (RPAS) will fly above the traffic lanes at the Pas-de-Calais in France bordering the English Channel.

-The drones will be collecting data on the sulfur concentration in the emissions and gas measurements as well as sending images and flight trajectory data to EMSA’s RPAS data center.

-There the data will be analyzed and transmitted to THETIS-EU, a European database used by authorities around Europe responsible for ship inspections.

According to EMSA, EU member states are informed of breaches to facilitate the coordination of the ship inspections. If the emissions measurement taken by the drone reveals a breach in the concentration limit, a subsequent ship inspection may be triggered at the next port of call.

The drones being used in the program are being supplied by Nordic Unmanned, working in partnership with the NORCE Research Institute AS, Schiebel and Explicit, to develop the system in cooperation with EMSA.

The Danish Maritime Authority ran a similar trial program in 2019 and resumed its efforts with a second test this summer.

The Danish program, which is scheduled to continue through the end of October, also using drones from EMSA is checking emissions of ships in an area north of The Great Belt, where many large ships pass sailing to and from the Baltic Sea.

By flying into the ship’s exhaust gas plume, the drone can use its so-called “sniffer technology” to register the sulfur content in the ship’s fuel.

In the Danish program the data is immediately available to the Danish Environmental Protection Agency, which can then follow up if a ship is emitting too much sulfur.