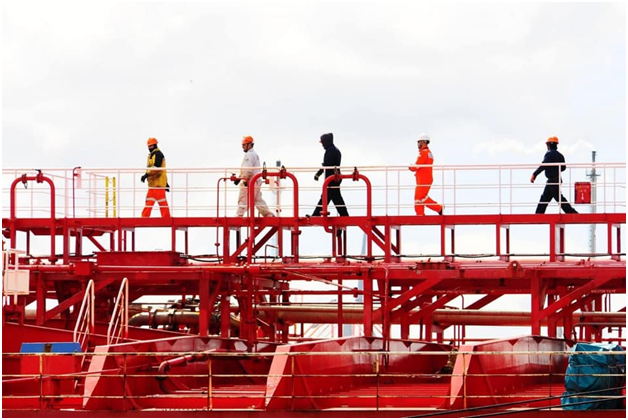 -Several crew members on a ship headed for Halifax have been stuck on board for about 14 months.

-Seven international workers who have been stuck on board a container ship for more than a year will be repatriated soon.

-Some crew members will be able to go home after visits to Palm Beach on October 10 and 23.

Seven international workers who have been stuck on board a container ship for more than a year will be repatriated on October 10, according to an inspector with the International Transport Workers’ Federation, reports CBC.

The crew members are on the Tropic Hope, which docked in Halifax harbour Sunday night.

Crew stranded owing to the pandemic

Karl Risser, the federation’s inspector for Atlantic Canada, said he met with officials from the Canada Border Services Agency and Transport Canada that evening and came to a resolution.

“Canada has now worked out an agreement with the ship owner that they’ll be repatriated early on their next visit to Palm Beach [Florida],” he said.

The ship’s next visit to Palm Beach is scheduled for October 10. It was slated to leave Halifax on Monday night. Another seven people will go home during a visit to Palm Beach on October 23, but Risser said the first group is “the most critical” because they have been on the ship for so long.

The Tropic Hope has been working a route to Florida and the Caribbean from Halifax for more than a year without its crew going home due to the COVID-19 pandemic.

“These guys have been on board for a long period of time — 12, 13, 14 months,” said Risser. “We watched them be very happy to celebrate with their families as they got back in touch with them through their phones to say they’re coming home.”

Hundreds of thousands of seafarers, many of whom are from China, India and the Philippines, have been stranded on cargo ships around the world since the start of the pandemic.

Risser’s group had asked for Canadian officials to detain the Tropic Hope in Halifax until the issue was settled.

On September 20, he boarded the Tropic Hope and spoke with the captain and some of the crew. He said he learned six crew members had been on board since August and September of last year, well past their original nine-month contracts.

The inspection followed a complaint from an international seafarer’s wife who was worried about her husband’s mental and physical well-being.

Transport Canada has said it’s aware of the concerns with the Tropic Hope crew and that on Sept. 20 an inspector found “a deficiency under the Maritime Labour Convention (MLC) and instructed the master of the vessel to rectify the deficiency.”

In response to a media request from CBC on Monday, the U.S.-based Tropical Shipping, which owns the Tropic Hope, provided a copy of an email it sent to Transport Canada on Friday.

-The email said 40% of Tropical Shipping’s entire fleet has already been repatriated.

-It also said it has been taking actions regarding the complaint and is working to get the crew changes done successfully.

Fear of being blacklisted

Risser said he was glad to see Canada stand up for seafarers at Sunday’s meeting because “they’re being denied basic human rights and worker rights, and it’s simply because they can’t stand up for themselves.”

“They have a legitimate fear of being blacklisted and never working again. So they need us to stand up for them and that’s what we did last night,” he said.

Risser said Canada has recognized the importance of seafarers who keep the country’s supply chain going by creating corridors for them to get home.

“We have to make sure that the rest of the countries around the world do that so that seafarers who are keeping us going in this time of COVID get home safe, and we get more seafarers on board and fresh crews on board these vessels,” said Risser. “And the only way to do that is through strong enforcement.”

He said the federation will continue to monitor the Tropic Hope to ensure the company follows through. Risser said the scope of the issue of stranded seafarers is huge, and the federation is doing everything it can to help them.