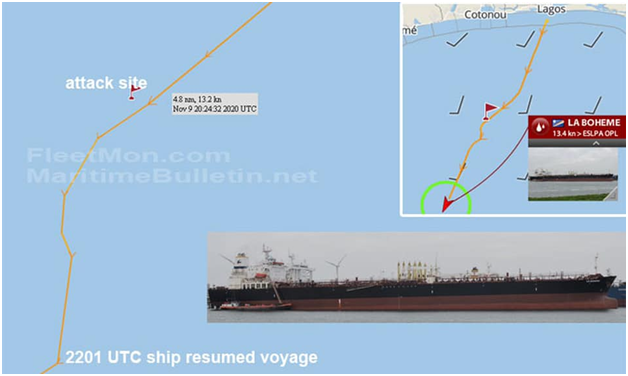 Merchant ship was attacked at around 2030 UTC Nov 9 in Gulf of Guinea, some 110 nm SSE of Lagos Nigeria. Understood it’s a product tanker LA BOHEME, according to her track and attack pos/time. Tanker en route from Lagos to Las Palmas was sailing in attack position area, and obviously, was maneuvering, but didn’t stop or reduce speed to slow. She was maneuvering, most probably in an attempt to thwart attack, for about an hour, resumed sailing at her voyage course/speed in an hour and a half, at around 2200 UTC, so hopefully, boarding was thwarted, tanker and her crew are well. Information and ship’s ID not yet confirmed.